I left Shkodra to sneak into the nearby villages. I would have liked to go up the river Kir but I chose to continue south, thus missing a visit to the fortress of Drisht.

But in exchange I stop in front of the Vau i Dejës hydroelectric power station, a modern fortress made of water and friendships of past times. Those with China. In fact, the power station bore the name of the leader Mao Tse Dung until the friendship between Chinese and Albanian communism ended. Because ideological friendships are like love; once finished, the name of the chosen person disappears from the diary. However, not far away there is an old fortress now abandoned to its fate, the Danja castle, once the subject of a dispute between Skanderbeg and the Venetians.

In the north, evidence of the past is not as visible as in the south. Less idleness and marble pillars but equally full of ancient smell. Countries abandoned for disease, wars and perhaps superstitions, which have left some squared stones or a few bowls to be remembered by future generations.

The old road that leads from Vau Dejës to Lezhe (built by the Italians) has a lot of charm because it is only beaten by the inhabitants of the area. A scenic road that is accompanied by dwarf oaks, hornbeams, wild pomegranates and turtles, which strangely in the period July-August chase down the road. For the season of love, the woods are not enough and we need the right scene.

A stop on the bridge of the river Gjader is a must. It too built by the Italians unites the two villages that the river divided: Naraç and Hajmel.

The river fairies no longer bathe without shame because the waters are cloudy due to the excavations for the construction of the hydroelectric plant. They will soon become "the central fairies". The same fate that has fallen to the most famous cousins ​​that populate the river Valbona.

Following the river to the east, you arrive at the castle of Vig, a Roman fort that controlled the entrance to the villages of Mirdite and which is now almost reduced to a pile of stones. I have already visited it dozens of times so I continue straight leaving the summit of Hajmel (Shita and Hajmelit) about 600 meters high on the left.

They say that up there at the top there are signs of past lives. Some swear they also saw hooks to make ships dock. Too tiring to climb up there; better to imagine Noah who stopped on his way with his ship on the summit and with an awkward maneuver made a piece of the mountain collapse. A landslide that the inhabitants call "Mali i rrezum" or "The fallen mountain" where a village was born that bears the same name.

Perhaps the archangel Michael with his celestial militias was fighting in another universe, while the church of Nënshat dedicated to him was falling apart.

These are the consequences of the experiment carried out by communist Albania, with its state atheism. We didn't kill God, despite the intention, but we forced him to pretend to be dead. And we deserve great recognition because among confused atheists and bigoted believers someone had to try. It seems crazy, but I like to think that it is only the desire to punish a god who had always forgotten us in the suburbs. If anything, the "side effects" were more damaging, such as the shot and imprisoned priests, the destruction of places of worship, the stigma of Latin as the language of the church and the loss of many writings produced by religious. Some churches were saved which were converted into warehouses and stables. A better fate had the cathedral of Shkoder, converted into a sports palace. It was an unsuccessful attempt by the power to control the afterlife too.

If you try to tell it in Italy you will pat yourself on the back, as if to say: "Good for courage!" But don't be fooled because you haven't listened to the last unsaid word: "idiots". Because it is more likely to meet a bigoted believer since only 12 percent of Italians declare themselves to be atheists. Don't be envious; God in Italy is not better. He is sick from the hypocrisy clinging to the sumptuous religious buildings, dying from the blasphemies and lost from the many scandals of the church. Maybe he was better off when he slept soundly in Albania.

Now here in Nënshat there is a convent of Carmelite nuns. The place has been redeveloped with great taste, and from here you can enjoy a unique panorama on the plain of Zadrima.

In that battle with God we have gained something. There are no longer the priests who once did not bless the Easter bread to the peasants who were unable to pay tithing, sending them to despair. This time the missionary priests presented themselves who gave concrete help to the population. As in the case of Antonio Sciarra, a priest who left his mark in the area by offering the population tools for work, fruit trees and courses to learn new crafts. The church of Krajnë was also built by mason apprentices, prepared with the courses organized by Father Antonio who lived a hard life in the country; threatened, mocked and robbed.

Among the other courses there was also the one dedicated to ceramics and terracotta which Vasil Kukaj has witnessed, who opened a laboratory where he exhibits his terracotta works, with motifs from the area, preferred as souvenirs by passing tourists. He and the others never forget the opportunity offered by Father Antonio and from this we can deduce that every offer that was made to this priest was not lost, but was made to arrive where there was need.

The small village of Fishta became famous thanks to the work of the Prenga brothers who built the most renowned agritourism in Albania. Is called Mrizi i Zanave name borrowed from the homonymous work of father Gjergj Fishta "The noon of the Muses". Their work aroused much admiration also thanks to the concrete help offered to the local families through the purchase of animals, milk, eggs or other fruit and vegetables that the farmers cultivate in their gardens. A quiet place located on a hill where oak and dogwood shade.

In addition to the restaurant there is also a small hotel built with an architecture where past and present are intertwined. As well as the restaurant menu with traditional foods brought to the maximum refinement that repays even the most demanding palates. A place that now needs no advertising because it is already known not only by Albanians but also by the many tourists who have been lucky enough to find a free place to have lunch. Because the only flaw also found by those who review the web is the battle to find a free place. So be patient and book in advance. 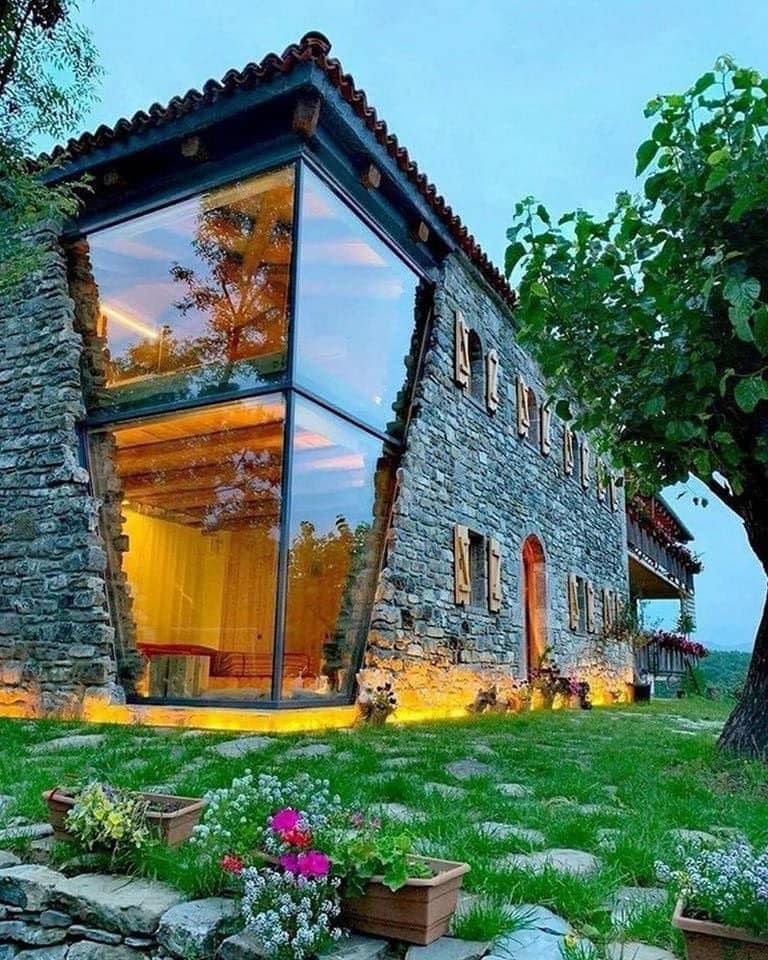 Two kilometers from the farmhouse there is another restaurant with a very inviting name "Fishta Oasis" or Oazi Fishte. Built on the bank of a pond which during communism was used to irrigate the corn fields, it enjoys an original panorama. The view of the lake is combined with that of the Vela mountain which rises near Lezha.

I head towards Troshan, but this is a story I will tell another time.

Read also: Scutari of Albania, a city in search of ancient charm