Ten Italian bloggers in Kruja to promote tourism in Albania

The trip was organized by Luciani Fani, manager of Travel Massive Albania, and by the Italian entrepreneur Dario Pellè, as part of the Travel Blog Tour 2019.

Traveling for theAlbania to promote my poetry book I stop as always in Kruja, my city, to meet friends. This time one of them, the administrator of the tourism information office "Kruja infopoint" Olsi Pengili, informs me that for a week in Albania 10 Italian bloggers have been on a tour.

This trip is organized by Luciana Fani, manager of Travel Massive Albania and Dario Pellè, an Italian investor who has lived in the capital for two years, as part of the Travel Blog Tour 2019. The cities chosen are those that belong to the Ionian coast, in addition Tirana and Kruja.

"Since you come to visit us, why not accompany them with us to our city?"- Olsi tells me by telephone.

I quickly take the opportunity and early in the morning I start the car from Tirana to Kruja.

The appointment is in front of the monument of the mythical national hero, Scanderbeg, in the heart of the city.
The 10 bloggers, armed with cameras and video cameras, come from all over Italy and are full of enthusiasm. Curious to know the former capital of Albania in the 12th century and the history of the only Albanian national hero, Giorgio Castriota Scanderbeg, who fought against the Ottoman invasion, set off on the cobbled streets of the old bazaar to reach the castle where other nice surprises await us. Mr. Drini Masha is the person in charge of the Municipality's Tourist Office.

Fascinated by architecture, bloggers discover that it is the Byzantine one and also learn about the old legend that tells the story of the cat that runs to find its lover, jumping from one roof tile to another. This shows us how close the houses were to each other.

The small bazaar looks like the well of treasures: shops packed with objects, carpets and fabrics worked by the golden hands of the Kruja artisans invite tourists and our group to come closer and admire them. The shop of Ndriçim Guni and his son Adi amazes us, the only ones in the province of Kruja who know how to work woolen fezzes according to the ancient tradition handed down from one generation to another.

Smiling and patient, Ndriçim begins to show us the process of making the wool thread until he realizes the fez, ready to wear it on the head. We all take turns wearing dozens of photographs. 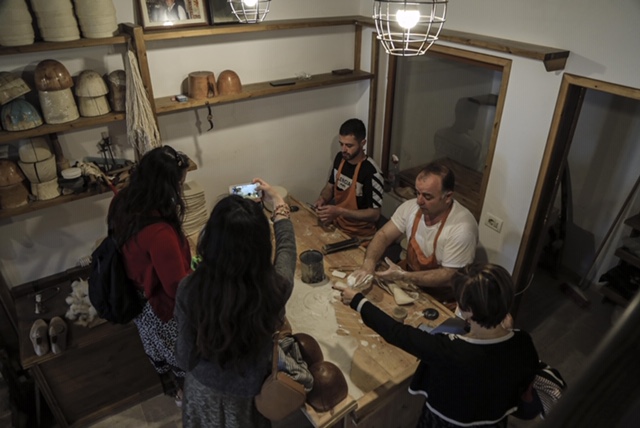 Two steps forward we enter the realm of carpets at Mrs. Deshire Maja's shop. Natural colored wool threads are woven into the frame. Other photos fall on the carpets as in the tales of the thousand and one nights.

The flag made of flags has not gone unnoticed: the Albanian, European and American ones. The desire to belong to the West is clear: bright colored fabrics, decorative objects and many other things fit into the bags of bloggers. All with a why. But we'll find out later, as we climb towards the castle walls. 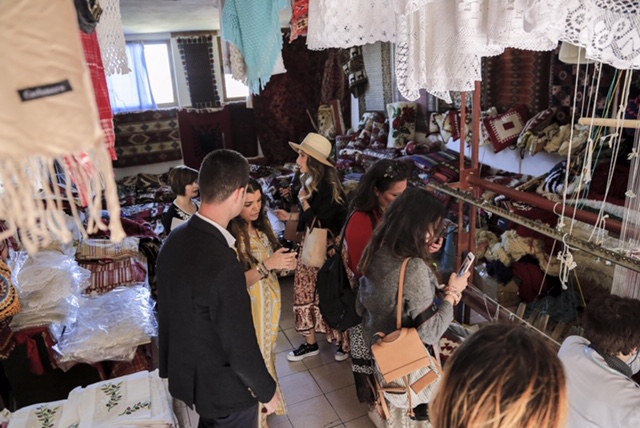 Before going up, to recharge your batteries, you need a sip of Turkish coffee that is served in the decorated branch cups at the bar of "Kafe Derexhiku" in the heart of the Bazar.

In past times the custom wanted a round of reading of the turned cup, with the spots of the coffee interpreted by the grandmothers who chatted in front of the doors of the houses in the early morning or in the afternoon.
The castle door extends its arms to welcome us into its own courtyard, as it has for years with thousands of visitors from all over the world. Opposite we find the ethnographic museum and to the left the majestic Scanderbeg Museum.

The ethnographic museum is a house that belonged to a noble family, to that of the Toptans. The house represents the architecture of the eighteenth century and shows the habits of life of the city of Kruja. Let's try to enter.

In the courtyard of the house the first fragrant spring flowers bloom: we are in April. On the ground floor, machinery and tools are kept for the production of the "shajak", a fabric made of wool for sewing men's and women's clothes, cheese and butter, oil extraction and grappa production ( raki).

Climbing the stairs we realize that the house divides the areas of family life: the men's room surrounded by embroidered cushions on the white linen fabric arranged on the wooden floor and divided by that of the women who show the traditional clothes embroidered with thread gold and silver and their gifts. Inside there is a small hamam (turkish bath) with the heating and refueling system with bath water and walls. A photo of the female group is needed to print the wonder and pleasure of this visit.

We go down the stairs and move towards the large museum. We realize that that day was museum day and the queue to enter is long. However, they don't make us wait that long.

The Museum Director, dr. Mehdi Hafizi, also a dear friend of mine, is waiting for us in the main hall of the museum. The latter has almost 40 years that welcomes thousands of tourists, he explains. Only this year have passed 30 thousand visitors.

Inside the museum are preserved various ancient objects and artifacts, armor, reproductions of geographical maps and statues of important people, such as warriors against the Ottoman occupation. Bloggers are fascinated by murals. Items and fabrics bought from the bazaar are starting to appear on the bags. The photos one after the other enrich their Kruja album. They start ticking on Instagram and on Facebook. At a glance the number of likes goes beyond a thousand. 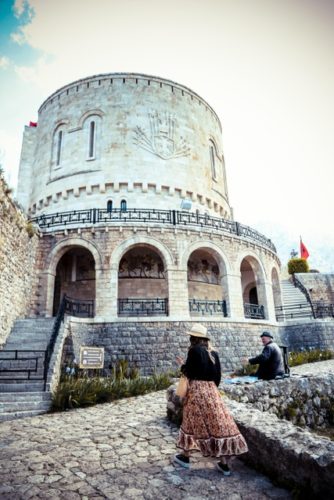 A breathtaking view extends from the terrace of the museum. They call it the balcony of Kruja. You can see the Adriatic Sea, Tirana and even Shkoder. Still more photographs. Without noticing lunch time he knocks in our minds.

Olsi Pengili directs us towards an agriturismo called "Restorant Bardhi". The restaurant is located a few steps from the Museum, in a very beautiful location south-west of the castle, with a terrace overlooking the valley in a height of 607 m above sea level. The view is spectacular. With extreme speed, in a few minutes we see two waiters setting up a banquet. 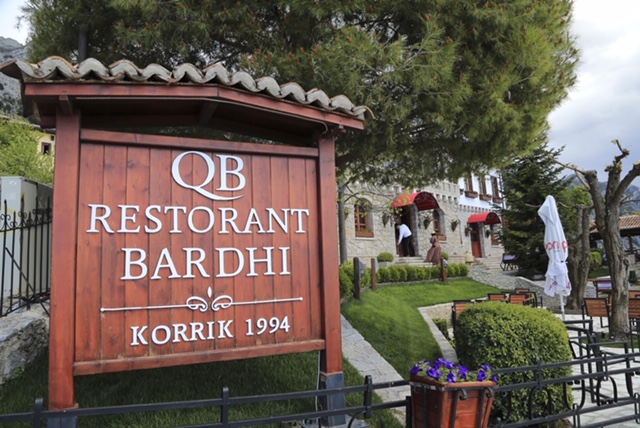 The colors of the prepared dishes are spectacular. Above them you can find everything: very tasty pecorino cheeses, fresh ricotta, homemade bread, peppers and vegetables of the season cooked and accepted, lamb cooked in the oven and chicken on the bed of polenta. Astonished and enthusiastic, bloggers take hundreds of photos. 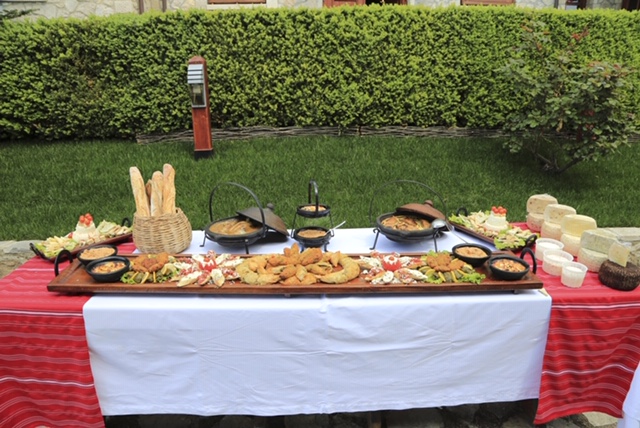 The "Bardhi" farmhouse has been in operation since 24 years and is managed by a single family. The owners - she a bank employee and he a forest engineer - decide to quit their job and dedicate themselves to this project day and night with confidence. The lady in the kitchen starts experimenting with the first dishes and the gentleman working the furniture to furnish in wood. Customers are starting to increase year by year.

Their son Bujar Bardhi, who trained at the hotel school, began to build and take care of a farm that will provide the restaurant with organic food: fruit and vegetables, vines, olive trees to extract oil, chickens and animals like sheep, goats and cows. With their milk, today they are able to produce 8 different types of pecorino cheeses with carrot, rocket, garlic and pickled vegetables. Caciocavallo is not missing. Their working group is composed of 20 people.

The rich and tasty menu conquers and satisfies our palate. To close we are offered the typical dessert of the house, the best in all Albania, the "kabunia". A dessert that really deserves to be told. I promise that another time I'll write about their recipe.

Smiling and touching the glass glasses filled with raki, the time is approaching to greet the hospitable city of Kruja. But with the knowledge that we could not see all that the city offers.
In front of the door of the room a last group photo and an affectionate greeting accompanies the queue of the machines of the bloggers who take the road back to Tirana.

The medieval charm of Kruja

2 March 1444, League of Alessio: the confederation under the leadership of the lord of Croia, Scanderbeg

Tourism in Albania: my travel experience