A few kilometers from the border with Greece, embraced by a splendid bay on the sea, you'll see the charming town of Saranda.

A few kilometers from the border with Greece, embraced by a splendid bay on the sea, overlooks the charming town of Saranda. In Italian it is also known by the name of Santi Quaranta, in reference to the nearby Byzantine monastery dedicated to the Forty Martyrs of Sebaste.

Known in ancient times by the name of Onchesmus, it was one of the most important ports of Epirus, thanks to which commercial relations with neighboring Italy were flourishing.

Naturalistic and, once again, archaeological marvels. Here is what the surroundings of Saranda offer within a few kilometers.

Syri i Kaltër (The Blue Eye)

Among the naturalistic wonders that Southern Albania offers, the Blue Eye is the best known in the world. It is a natural source of fresh water with a spectacular blue color, from which it takes its name. Average depth of 45 meters, surface temperature of about 12 degrees, the point of attraction of the source is the one where the water bubbles to rise. It is there that the name 'Blue Eye' definitely takes shape. 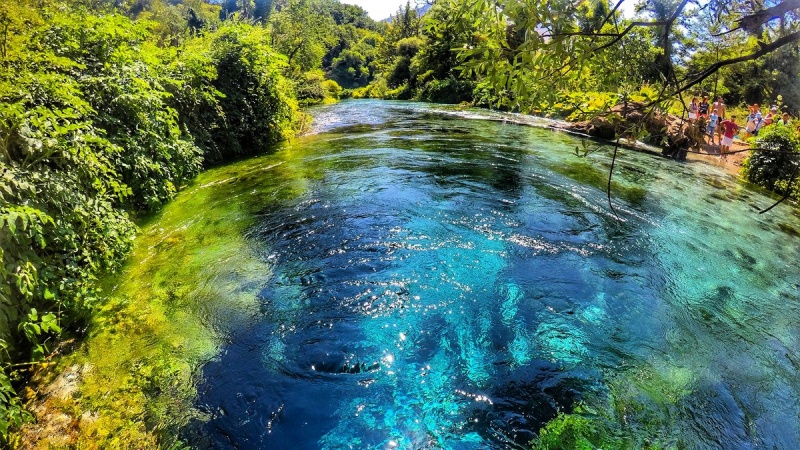 One of the most important archaeological sites in Albania, declared a UNESCO World Heritage Site in 1992, houses the ruins of the ancient city of the same name and the National Park established by the Albanian government.

City of the historic region of Epirus, according to Virgil it was founded by Elenus, son of King Priam. The historian Dionysius of Halicarnassus wrote that Aeneas, fleeing from Troy, also passed through Butrint.

Founded between the 10th and 8th centuries BC, the town was born as a center that haggled with Corfu and the nearby Illyrian tribes of the north. It became a Roman protectorate in 228 BC and, intentionally, was to become a city of veteran Roman soldiers. Those gradually transferred there repopulated it and equipped it, among other things, with an aqueduct and spas. The city already had a sanctuary, a theater and the agora.

Destroyed almost completely in the 3rd century by an earthquake, a century later it became a bishopric and the baptistery and the Basilica were erected, whose valuable remains can still be seen today in the Archaeological Park.

The archaeological excavations, which began already during the Fascist period and continued, in stages and thanks to international work teams, to the present day, have gradually brought to light other architectural masterpieces, such as the famous 'Lion's Gate'.

Butrint, the most important archaeological site in Albania

If you want sea and tranquility, but want less cement than what you can see in Saranda, Ksamil is for you.

This small fishing village has been fortunate to offer pristine beaches with crystal clear water for a relaxing holiday, in fact it is busier than Saranda by families with children.

Technically, it is part of the Butrint National Park, being only a few kilometers away. Its best attraction are the so-called 'Islands', an orogenic formation dating back to the Jurassic period of 4 islands that stretch out towards the Ionian Sea.

The archipelago is better known as 'Three Islands', also by the locals. In fact, two of the four islands, the outermost ones, are linked together by a small strip of land, so they are considered as a single island.

For the daring who have resistant arms, you can try swimming to the innermost islands, which, in fact, from the shore might seem quite close. Know that, in reality, the archipelago can be reached by boat. Or by pedal boat, if you want to try. They rent them on the beach facing the islands.

On the hill around Saranda there is this fortress, born as an Ottoman outpost to control the whole bay. It offers a spectacular view of the city and the most romantic ones go from sunset onwards to see illuminated Saranda. To be clear, most of the Saranda by-night photo shoots on the net are from up here.

Exceptionally preserved, declared a first-rate cultural monument by the Albanian government in 1970, the original building was square with two round towers in a mirror position. One of the terraces of the castle now houses a renowned typical restaurant.

Among the ruins of the village of Lëkurës, Sarandë

For more articles and information on tourism in Albania, you can visit turismo.al , an Italian portal on Albanian tourism.

Albania, over 3,3 million foreigners in the first 7 months of the year. Also in August boom of tourists

Butrint, the most important archaeological site in Albania

Informal tourism: a dark side of Albania denounced by Edi Rama