How to fall in love with Albania: chronicle of an announced destiny

A thousand thoughts and emotions filled my head, amplified by love for my future bride who always embodied the pride, pride and stubbornness of the Albanian people.

At the end of October of the 1990, a powerful inboard motorboat carrying eight Albanian refugees arrived in Monopoli, south of Bari. At the time I was the monopolitan correspondent for the regional newspaper "Puglia" and wrote about the event. No one at that moment could have imagined what would have happened in a few months, no one even remotely could have foreseen that painful diaspora that many Albanians would have brought to the Puglia coasts. 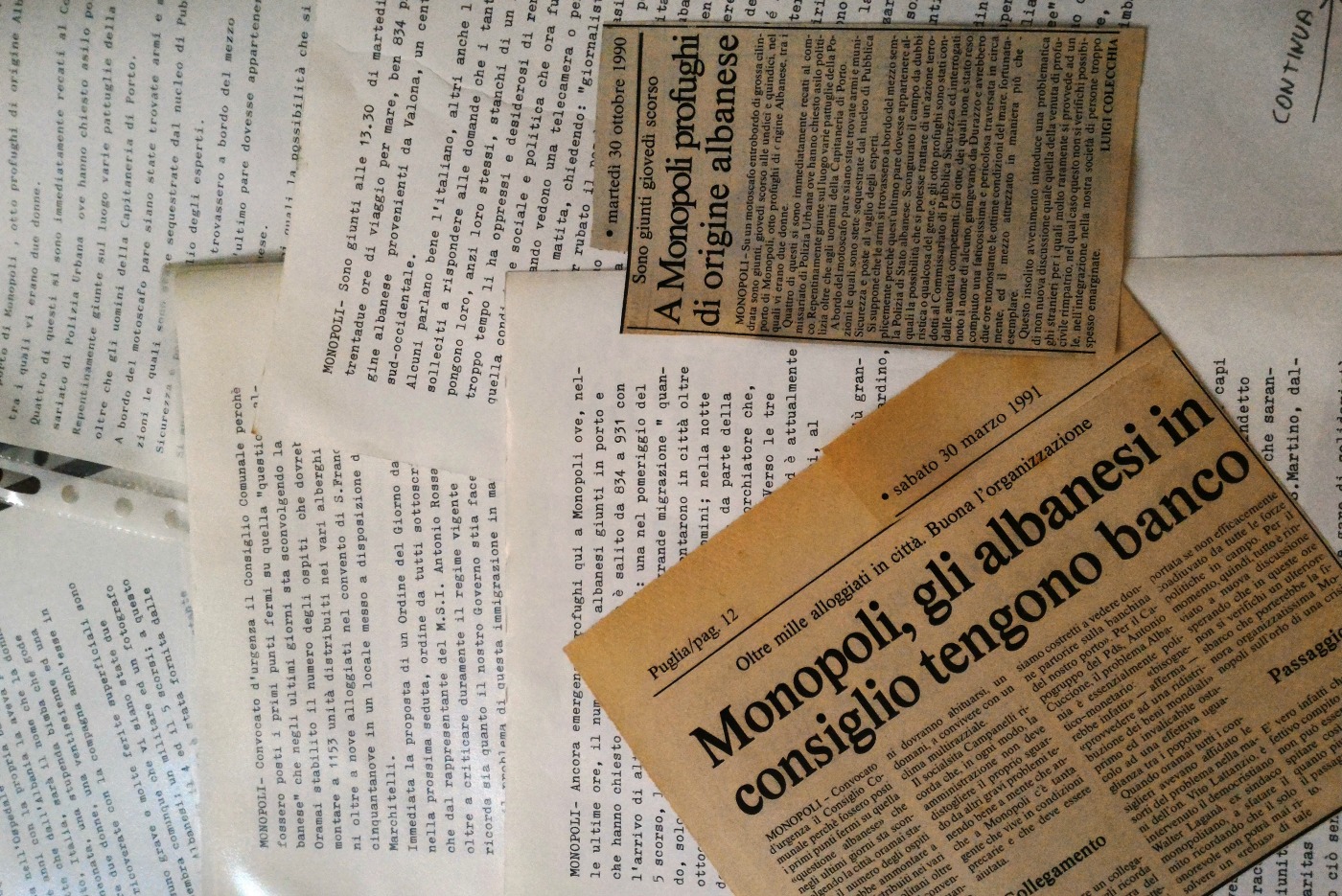 At the next 30 in March 1991 the Albanians in Monopoli had become 1153. I knew very little about Albania and Albanians in those days, if not what came to me from the national newspapers, from the study I had to face in order to treat the subject seriously (starting from the splendid reportage, although dated, of Indro Montanelli, "Albania one and a thousand" , Paravia 1939), some anecdotes that were told around (such as the one in Albania that could be seen on TV a couple of Italian channels besides the national channel TVSH). For years I never thought about it again because the Albanian integration in Puglia was well managed, many families were welcomed and hosted by private individuals, almost all found work and fit perfectly into the social fabric.

I had to wait for the first years of the 2000 to hear again loudly about Albania. I collaborated with the "Teca del Mediterraneo", the Library of the Regional Council of Puglia and, within the Interreg IIIA (a project of cross-border collaboration between Italy and Albania with European funding) I took care of the preparation of a bilingual bulletin, interfacing with a cultural mediator and translator from Elbasan. She then became my wife.

My interest in the Land of Eagles, therefore, increased exponentially and between June and July 2007 also began to travel between Puglia and Albania, always offering me a job as a volunteer whenever it was necessary to be present at a conference or to deliver or collect documentary material. Thus, at a time when the visa grant was still very restricted, I was able to meet my future wife quite frequently.

The first time I arrived in Albania I arrived there with an Albanian Airlines plane. Tirana-Rinas International Airport, dedicated to Nënë Tereza, welcomed me with sounds and colors that I can hardly forget. In addition to the passengers in transit, in the free access areas there were many citizens of the neighboring areas who used the bars of the airport as a pleasant meeting point. Unimaginable in Italy.

Just as I will never forget the heat that only those who have been there know and whom I find waiting for me at every summer vacation. Everywhere, already from June until late September, the temperature often exceeds the 40 grades, leaving no way out. It is necessary to take refuge in a bar or a supermarket, even for an impromptu expense. A van accompanied me to my hotel in Tirana, in rruga Myslym Shyri, and my life changed radically. The traffic also entered my soul, while with the taxi driver I spoke in a rudimentary Italian (only later did I learn Albanian, beginning with a vocabolareetto found at Feltrinelli and an old grammar for university students); how many colors and lights, how many incredible smells, first of all that of cooked food on the street (qofte or chicken ...).

People were serious without being serious, always kind, always with a smile, always ready to help you, anyone, at any time, from the taxi driver to the hotel receptionist, from supermarket tellers to bar waiters ... I was lost, in a dimension that I did not believe existed, between a beginning of modernity and a sort of historical immobility (between Turks, fascists and then the regime of Enver Hoxha ...).

Around Tirana I was almost lost, where for the first time I learned that not only for rhetoric but also concretely religions can coexist. And here a few steps from each other I found a mosque, an Orthodox church, the Catholic cathedral of San Paolo.

The houses fascinated me, some very colorful, others almost crumbling, with bricks and exposed concrete. Then the palaces of culture, politics, power, all close together, all with gravestones and monuments from the regime period still in plain sight.

Almost stunned by such fruitful beauty I let myself be carried away by the flow of people through the streets. At each corner a restaurant or a bar, small or large, many with Italian names (perhaps indicating that the owner had been in Italy in the past and had returned to Albania with his wealth of experience), all beautiful.

I immediately learned why almost all the shops had outside a generator ready for use: because in Albania, especially in the height of summer, the current is missing at least a couple of times a day; sometimes even water is missing. This is the right time to leave your home (or the hotel, as it happened to me on that occasion) to go for a coffee outdoors.

Already, even water is a fundamental resource, woe to be caught unprepared and have it missed at home. The shops also sell 5 liter bins and almost all the buildings and individual homes can count on a reserve tank for periods of drought.

In the immediate surroundings of Tirana it already sank into another Albania, a rural and agricultural Albania, an Albania rich in its modesty, an Albania in which one easily gets lost and from which one no longer wants to go back. We climbed for vast expanses of hills, the old road to Elbasan (before they built the very recent highway) was almost a mule track without protections on the void, except for a sort of almost artistic white wall made up of many successive small arches, maybe thirty or so high centimeters. Almost everywhere old small concrete bunkers were sprouting out of the ground, wanted in great numbers by Enver Hoxha (one perhaps speaks of 750mila, certainly more than 500mila); some of these are half-destroyed, others are imaginatively painted, others still adapted to the needs (such as to make us grow around and above the vines, as in the photo).

A thousand thoughts and emotions filled my head, amplified by love for my future bride who always embodied the pride, pride and stubbornness of the Albanian people. My first trip to Albania, the first of a very long series that still lasts today, was just a week long. Too little to focus on everything, enough to fall madly in love with a land, its people, its history, its traditions, its culture.

I returned to Puglia by ferry. I left Durazzo, from the "old" port of Durres. But this is another story ...