Travel to Albania. Berat and Gjirokastra

The historic centers of the cities of Berat and Gjirokastra are Unesco heritage from the 2005. Two castles - on top, marò and what a scarpinetto! -, very particular civil architectures. [of uses and customs I cannot say].

A Berat, enclosed in the walls of what was the castle, there is a small cluster of houses still inhabited. Some have become b & bs and restaurants, some have been restructured or have been lovingly restored, others have recently been abandoned - they say vases with dried flowers and faded curtains on the windows - while others still survive for the least time.

On the walls, on the outside and here and there among the alleys, on display, doilies and slippers knitted, blankets and embroidered placemats.

A craftsman, in the shadows of the entrance room of a ruined house, carves in bas-relief, on wooden tablets, glimpses of the neighborhood with windows superimposed at the foot of the castle.

The hand made of the tricot does not appeal to me at all, instead the chisel stroke that transforms a piece of wood into the stylized reproduction of a landscape ...

I buy some views of Berat. I take them with me wrapped in newspaper.

In addition to the houses, among the walls of the castle there are the remains of the mosque, of the cisterns, of churches and the bel Onufri iconographic museum. It is housed in the Orthodox Church of the Dormition of Mary. Mary's "dormition" is the orthodox equivalent of Mary's Catholic assumption. In the icons, the scene represents Mary lying on her deathbed in the lower part, in the center Jesus holding her as a child, symbol of the soul ready to be received into heaven. The icons, thanks to the audioguide (also in Italian, alè!) Provide information not only religious, but also related to the political, civil and cultural history of Albania, and of Berat in particular.

The castle village is fascinating above all in the evening, when the tourist route ends and the silence and shadows of the walls projected by the lights on the towers remain. In the evening the entire historic center of Berat is spectacular.

Below the castle - far below, and what a steep climb! - the neighborhood of Mangalem, separated from the river Osum by that of Gorica.

It is above all the Mangalem district that gave Berat the epithet of Città with overlapping windows.
It is not walking in its narrow streets that you can get full perception.

We must cross the bridge and enjoy the overall view, from both sides.

The two areas of the ancient center, one Muslim and the other Christian, are divided by the river but connected by two bridges.

And just as in the castle there are mosques and churches, in the two neighborhoods the religious division was not categorical.

Berat was the emblem of coexistence and religious tolerance, before the regime made Albania, by Constitution, the first atheist state in history.

I am not a believer, but religious tolerance is an essential value for me.

However, I could not help but notice how many newly built mosques, either under construction or under renovation, now dot the villages of Albania. Imposing, with very high minarets. I don't know, I really don't know, if it's good.

The roofs of old houses are in slate; the construction method reminded me of the trulli of Alberobello; small slabs of stone embossed one over the other.

The lower part of the houses has no openings besides the front door: the decorated windows are on the upper floor, protruding from the base.

You can get an idea of ​​the interior by visiting either the Museum of Ethnography, located in the birthplace of Hoxha (but it is a reconstruction, as the original building was devastated by a fire), than in the Skënduli house. (there are also other houses / fortresses / monuments that can be visited, but I did not enter it).

The museum is actually silent. There are no explanatory panels, nor a guide. A deposit of materials in a partially furnished house.

(the sense of machine guns and cannons in the space intended for pantry, between bottles and jars, I just couldn't understand it)

In the Skënduli house is a member of the family to accompany visitors. The member who accompanied the group of which I was a part - a group that happened to be at the same time in the courtyard of the house - and it seems a joke, consisting of two Spaniards, two French and two Neapolitans - is a bizarre and fascinating character .

I will call him Mr. Sk. Magro, almost lanky, with whiter than gray hair. Mr. Sk is sitting in the chair reading a newspaper. He gets up, puts his glasses back in his shirt pocket, and asks where visitors come from.

Then with nonchalance he begins to rattle off explanatory sentences in simultaneous Italian-Spanish-French translation on the history of the building in which he lived until expropriation - two rooms and kitchenette gave me -, on the 46 fireplaces to show off the wealth of his progeny, and leads us into the rooms showing us the "secret" doors and trap doors, the use of some work tools, up to the main living room, with the finely frescoed fireplace and the carved ceiling .
An experience, in the true sense of the word.

The heart of Gjirokastra is the bazar.

(now converted into a souvenir bazaar, for tourist use and consumption)
On the small square three main roads converge, marked by the facades of as many buildings.
But the square is an open construction site. What a disappointment to be here in the fervor of public works for the renovation of the streets! (and of the mosque!)

Barriers, concrete mixers, cable rolls and bags of construction material weaken the charm of the place. 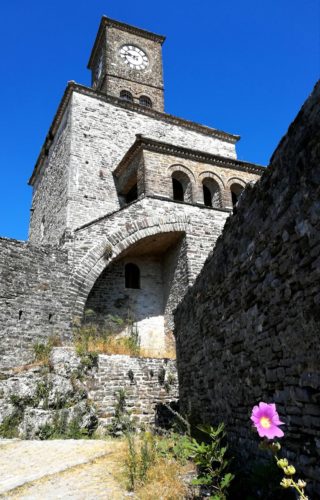 The castle, on the other hand, is a veritable fortress at the top of the mountain - of course, what a waste! - and preserves the surrounding walls intact.

Inside is the weapons museum (I refused to see it).

The tower with the clock cannot be visited, like a wing of the castle.

But the look on the slate roofs, on the mountains on the horizon, on the abyss where, according to legend, the princess Argiro would have thrown herself with her child in her arms so as not to hand him over to the invaders, is worth the whole grit to arrive and the visit.

Albania is a small country, but a week is really too short a time to visit. I had to give up a lot.

[ Ksamil must be a charm.
- But in August? better not.
And the north and the lake of Ohrida?
- Or that or the historic cities, the time-switch is not yet in our budget.]

Like every time I come back from a trip, I tell myself that it was short, that I saw too little.
Every time I think who knows, maybe tomorrow.

Albania is near, cheap, and very hospitable. And then I made a promise. I'll be back sooner or later.

We invite you to follow Mariateresa in your blog , with other fragments of travel from Albania and beyond.

Centennial photography and its history that with nobility win back Gjirokaster