The two airlines have registered the largest growth in terms of passengers, with + 167% and + 89% respectively.

The so-called low-cost flights have recorded a great growth during the month of August with the airline Wizz Air, according to the data of the civil aviation authority.

Behind us is Lufthansa, with + 89% compared to last year. Companies operating from and to Italy - such as Blue Panorama, Albawings and Ernest Airlines - hold the largest share of the air transport market during the month of August with a total of 190.515 passengers, the 45% of the total.

These numbers will soon be joined by those of the Air Albania company, which since 30 September started operating from and to Milan, Rome and Bologna. Later, however - as stated by Prime Minister Edi Rama - to the fleet will be added the new aircraft "Naimi" (which will operate to other European destinations) and "Noli", which will connect Albania and the United States with direct flights.

As regards charter flights, the 7.438 passengers of the airline "Pegasus Airlines", which operates from and to Antalya, are not calculated in the total number of civil aviation authority data. In total, therefore, the charter flights in August reached a flow of passengers 86.075 (and not 78.637 as reported by the airport data), the equivalent of the 20% of the air transport market - the highest absolute value. 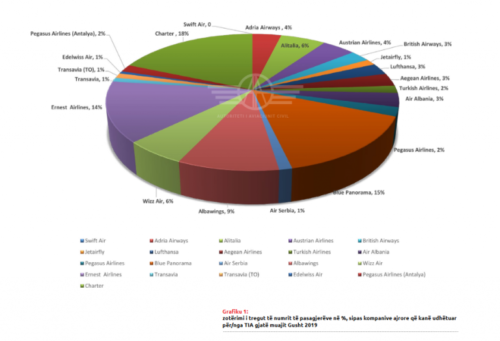 In addition, the low-cost airline EasyJet, which will connect Milan Malpensa to the capital Tirana with two weekly frequencies, Thursday and Sunday, will also enter the Albanian air market from the 28 November.

The mystery of Italy-Albania travel. Nobody knows anything

Albania, I took the robbers who had attacked the valuables at Tirana airport

Coronavirus, Albania also suspends flights to and from Great Britain