As I have often written, the history of Albanian international football offers continuous surprises: important tournaments and memorable matches come to light, not even present in the advertising of this Balkan country.

After Dinamo Tirana in the Czechoslovakian football pools in 1958 (see here), the "Rudé Právo", the most important newspaper of the former Czech and Slovak state, tells us that eleven years earlier the 17th Nëndori (then with the "d") (note) was a guest in the football tournament more important of the First World Youth and Students Festival, held in Prague between July and August 1947. The other football tournament, however, was set up for representatives not recognized by FIFA: French Algeria, North Korea and Free Territory of Trieste. 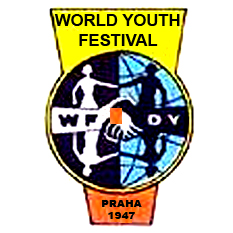 In 1947 they were invited to the most important football tournament: the Bohemians Prague (fifth in the Czechoslovak league 1946-47 and host), the Crvena Zvedzda (Red Star) of Belgrade (third in the Yugoslav championship 1946-47) and the 17 Nëndori Tirana (fourth in the 1947 Albanian championship): the invitation was to honor the Balkan title of the Albanian national team, the reigning champion in the first European international tournament played in Europe (in Albania) in 1946.

The Bohemians played the first game and drew it against Crvena Zvezda 2-2 on 25 July. The decisive game turned out to be that of the Bohemians against 17 Nëndori on 27 July: it ended 2-1 for the Bohemians: the Albanians scored first with the Loro Boriçi in the 17 ', the hosts equalized with Vinko Golob at the 40', and passed ahead and won with Ladislav Müller in the last minute of the first half.

The Bohemians had mathematically won the tournament. 17 Nëndori and Crvena Zveda played the decisive match for silver and bronze on 29 July. A great match preceded by a demonstration of historic Florentine football between two Czechoslovak teams, finished 2-2.

On 17 Nëndori took the lead in the 18th minute with a goal by Aristidh Parapani. At 36 'due to an error by the Albanian defense, the Yugoslavs drew with Zlatko Čajkovski (loaned by Partizan Belgrade and among the protagonists of the Balkan Championship of Tirana in 1946). At 49 'Čajkovski again made the 2-1 for Crvena Zvezda. Branko Stanković at 62 'brought the result to 3-1. However, the Albanian reaction led Loro Boriçi to 74 'and Skënder Begeja to 89', which equalized the fate of one of the most beautiful international matches of 17 Nëndori.

What will be the next surprise? Prepare yourself…

Euro 2020 qualifiers, Reja's squad for the matches against Andorra and France