The importance of being Lorik Cana

Today 27 July is the birthday of Lorik Cana, one of the most loved sportsmen of all time by the Albanian people.

Today 27 July is the birthday of Lorik Cana, one of the most loved sportsmen of all time by the Albanian people, the player with the most appearances in the history of the national team, the captain who led De Biasi's Albania to the first final phase of a European championship. In short, in short, an authentic legend of the Land of Eagles.

A few years ago when I was asked what Lorik Cana represented for Albania, I replied verbatim as follows:

"There are no words to describe what Lorik Cana represents for Albania. It is something that comes close to the unspeakable, which has never been seen anywhere else. There is no Albanian who does not love him madly. He is the captain, the face of Albania, the leader of many battles, the one who never turns back.”

Lorik Cana was born the 1983 in Gjakova, in Kosovo, and then moved with all his family to Switzerland in the 1992. Here begins his great career as a footballer that will bring him to the 2000 to sign his first major contract in France with Paris Saint Germain.

In France, Cana will remain until 2009, between Paris and Marseille. With this last jersey his great personality emerges, which will lead him to become the first non-French captain in the history of the OM. Over the years he has become one of his many talks as leaders in the Marseilles dressing room, during the years in which he played players of the caliber of Franck Ribery and Samir Nasri:

The following year Cana moved to England, to Sunderland, where the then club coach Steve Bruce immediately entrusted him with the role of leader of the locker room and, surprisingly but not so much, the captain's armband. After all, if you are born captain, there is little else to do.

Galatasaray, Lazio and Nantes are his other footballer stages. Everywhere he leaves a magnificent memory, thanks above all to his vocation as a "warrior" that leads him to always leave his whole self and his sense of belonging in the field.

However, for someone who had to escape from a war at the age of nine leaving their country of origin, playing only at high levels is not enough. Cana, in fact, has always been and is socially active, especially with children: it wants to give them the opportunity to grow while having fun practicing sports, the same possibility that many of their peers left in Kosovo have not had.

For this reason, besides being UNICEF's ambassador, in April 2017 founded the "Lorik Cana 5 Foundation" of which he recently spoke also the UEFA website. With the help of the federation, the foundation aims to educate, support and promote the culture of sports and sports activities in kindergartens, taking care of the physical and mental health of children.

In addition, small soccer fields will be built in the same kindergartens. The first was inaugurated last May in a kindergarten in Elbasan. A great initiative. As big as the heart of Lorik Cana.

Lorik Cana - having passports - could have played for Switzerland or France, but his choice was always meant to be only one: Albania. With red-blacks he made his debut in the 2003, at the age of 19 years.

The beginning of a unique story, which will lead him to be - with 93 matches - the player with the most presence in the history of the Albanian national team. There would be endless anecdotes to tell on Cana in the National, we have chosen three. The most emblematic and the most significant.

No nationality is changed

The 26 March 2011, at the end of Albania-Belarus 1-0, Lorik Cana takes the microphone and addresses all the fans present at the stadium:

"Hey, tell everyone. We do not change nationality, we do not sell albanism. "- Cana shouted to the fans as he proudly touched the eagle tattooed on his arm

The night in Belgrade was also unforgettable. The 14 October 2014 should have been held in Serbia-Albania, valid for the qualifications for the Europeans of the 2016, which was first postponed and then won by the red-blacks of De Biasi.

Cana becomes the protagonist of a gesture that is in some ways heroic, striking a Serbian fan that I invaded the field and hit with a Balaj seat. 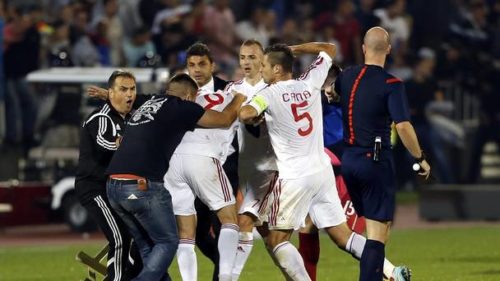 The tears of Cana in Yerevan, Armenia, after qualifying for Euro 2016 made all the Albanian people excite. The realization of a dream for Lorik, to drag his Albania - as captain - into a final phase of a continental competition. 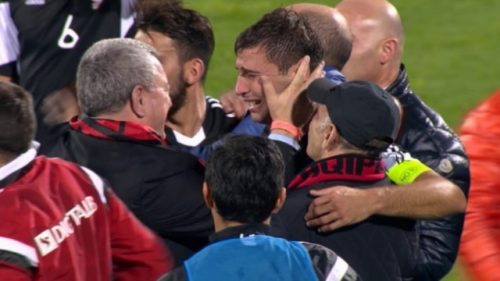 The curse of the last minutes strikes again!

The adventure of the Albanian national team begins

Lorik Cana, a young star from the football adventure to the relationship with politics

Albania's journey towards the EU