Rama at "Porta a Porta": I hope the world won't leave us alone

The Albanian premier, host of "Porta a Porta", invited Europe and the world to contribute to the reconstruction of post-earthquake Albania.

The Albanian Prime Minister Edi Rama was a guest on the evening of the TV show "Porta a Porta" conducted by Bruno Vespa. With him, guests in the studio, the art critic Vittorio Sgarbi and his daughter Alba.

The earthquake in Albania

The main topic of discussion in the study was the tragic earthquake that struck Albania on November 26 and that caused 51 victims in addition to damaging almost 10.000 homes.

"It was an absolutely tragic situation. It was really too much for our country because we have little means to deal with a tragedy of this size. I want to communicate to everyone the need for solidarity, which however has been there since the first day from Italy and to which I am grateful.

Prime Minister Conte was the first to answer me, and the first rescue team came from Italy. I would like to thank all those who have arrived in Albania, because they are truly heroes: they have put their lives in danger to save the lives of others.

[...] If the saying is true that what does not kill you makes you stronger, then we must make it a visible fact in the country. We are working on a reconstruction plan that is a recovery plan. And that's why today at the NATO summit I called on all countries to contribute together through a large donors conference and received a fairly encouraging response.

Because with our funds it is humanly impossible to do all this. I hope that the world and Europe will not leave them alone."- declared Prime Minister Rama to" Porta a Porta ".

Around the 13 of today 5 December, the Albanian premier Edi Rama published a tweet - with recipient his Italian counterpart Giuseppe Conte - of thanks for the civil protection teams:

"It will never be possible to say with words what I feel, what all my people feel in these days, looking at how Italy and its guardian angels, men & women of Civil Protection, are putting it all to help us rise from the rubble.

There was certainly no need for this tragedy to know that Italy has a huge heart, but to feel it so close to that heartbeat during this very difficult crossing of the desert for Albania, and truly fantastic! Thanks friends. ”- reads the tweet. 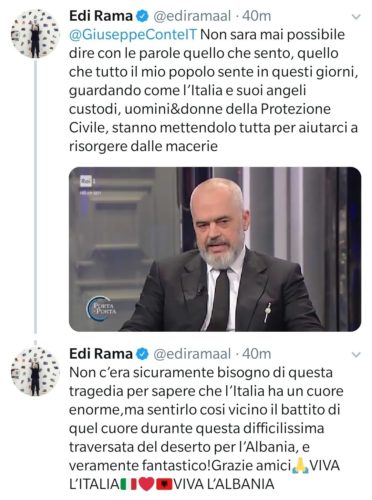 The president of the European Commission, Ursula von der Leyen, has promised a donation from 15 million for Albania following the violent earthquake that the 26 November shook the country.

"The European Union is in full solidarity with Albania with concrete acts, not just in words. So far, the Commission has helped mobilize three research teams composed of more than 200 staff from Italy, Greece and Romania.

Commissioner Lenarcic will travel to Albania to closely observe the situation and thus create a clearer and more complete picture of the damage, as well as to assess the type of assistance needed for reconstruction. The first step is to donate from our 15 funds millions of euros in support of the Albanian people."- said the new president of the European Commission.

Di Maio to Prime Minister Rama: "We will find a solution at the Donors' Conference"

Earthquake in Albania, seven experts from Italy will assist the Albanian prosecutor

Albania earthquake, donors' conference will be held on February 17 in Brussels

Macron: an international conference to support post-earthquake reconstruction in Albania.

Euronews returns to deal with the case of Alvin Berisha

Country Guide Albania 2020, a volume that aims to guide companies to foreign investment