The work on the TAP pipeline continues. The pipes were successfully laid on the Albanian shore.

The first submarine draft of the pipes of the trans-Adriatic pipeline in Albania was successfully completed.

The Saipem company, which holds the TAP contract for the responsibility of engineering, procurement, construction and installation of the marine section, is using the ship 'Castoro 10' for this process.

The piping systems were welded on board the ship, located approximately 1,4 km from the coast, to then be tested later. Once tested, the pipeline was 'placed' at the bottom of the sea.

The ship 'Castoro 10', long 139 meters and long 31, is continuing in Albania the works for the installation of the pipeline in shallow water and for that of the optical fiber. He is also working to complete the work on the coast.

Work on the maritime section of the trans-Adriatic gas pipeline in Albania started last October. The section, which links the Albanian coast to the Italian one, will have a length of 105 km.

The TAP will be positioned on the Adriatic seabed: for 37 km in Albanian waters, for 25 km in Italian ones and for 43 km in international waters. The deepest point of the pipeline will be around 810 meters below sea level. For the construction of the maritime stretch, approximately 9000 meter diameter tubes will be used, for a total of approximately 0.91 tons.

The trans-Adriatic pipeline will transport natural gas from Azerbaijan to Europe. Along 878 km, it will be connected to the trans-Anatolian pipeline near the Greek-Turkish border of Kipoi. It will pass through Greece, Albania and the Adriatic Sea, before arriving on the coast of southern Italy.

Its construction will facilitate the supply of gas in some south-eastern European countries and the transport of natural gas from the Caspian region to the largest European markets.

The pipeline will promote economic development and job creation, as well as being a major source of foreign direct investment in Albania. The first amount of gas will reach Europe in the 2020. 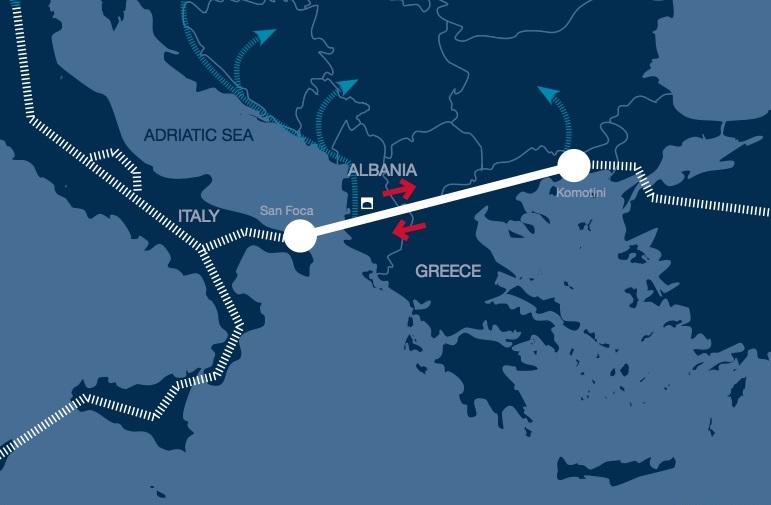