Albania: The President asks the people to take to the streets against the government

The presidency, the government and the parliament have long been involved in a long institutional conflict, which started last year, when President Meta had issued a decree which canceled the date of the administrative elections set for June 30th.

Ilir Meta, President of the Republic of Albania

On Wednesday, February 19, the Albanian president called on his people to take to the streets to overthrow the government, accused of violating the country's constitution and connections with organized crime.

The President Ilir Meta at a press conference invited the population gather in the capital Tirana il 2 March, the same day he intends to sign his first decree against what he says is a "coup d'etat" carried out by the government through the judicial system. 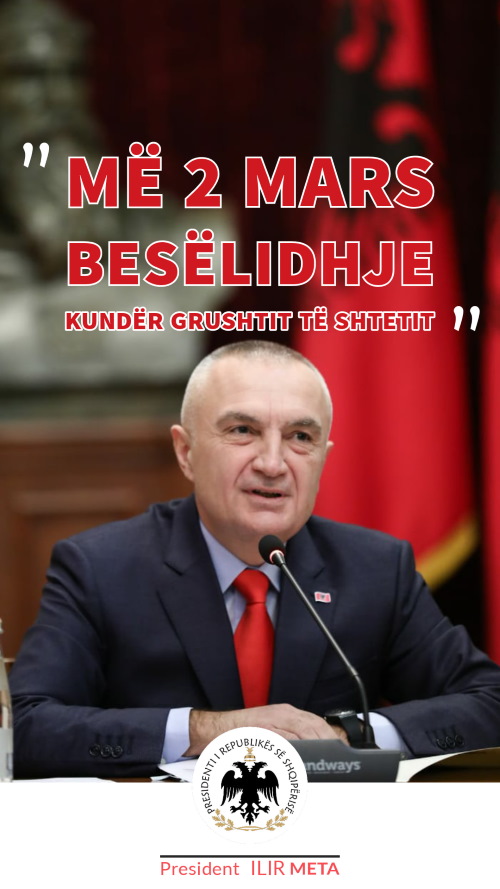 Meta's appeal comes at a time when the nation Albania has initiated reforms in the hope of getting the green light to open negotiations, in the future hope of full membership in the European Union.

The president said the justice reform system approved three years ago to eradicate corruption and ensure that judges and prosecutors are independent of politics - part of the effort to embrace EU standards - has failed.

The presidency, the government and the parliament have long been involved in a long institutional conflict. The case that once again sparked the clash between the parties concerns the approval last week in parliament of some changes relating to the oath procedures of the members of the Constitutional Court. Meta harshly contested the move that attempts to prevent the oath from being exclusive to the head of state, and argued that "it is a coup, which I will dismantle with the support of the Albanian people."

The world media echo the statements made by President Meta

The statement by President Ilir Meta on protests against the so-called "coup" by the socialist majority has spread widely in world media such as the New York Times , the British Independent and other Western, Serbian and Russian media also in English have reported the news, defining it as an emergency.

The FB status of the Meta president

This morning, February 20, President Meta published an FB status by renewing the invitation to the population to take to the streets on March 2. In the status there is no trace of the decree he mentioned yesterday.

“Dear citizens of the Republic of Albania! The government's usurping aggression against all independent institutions in the country is a bitter reality that you all feel every day.

But his stubbornness to usurp at all costs in unconstitutional and mafia methods, even the Constitutional Court, clearly constitutes a coup d'etat, aimed at installing a minority dictatorship, terrified of the freedom of the Albanian people and therefore tries to eliminate any democratic opportunity for change and assumption of responsibility.

So I invite you all on March 2, on the Boulevard "Martyrs of the Nation", to give the last warning to this gang that does not pass a day in which it does not violate the Constitution and the laws of the country.

There is no force in the world that will bring the Albanians back 30 years back and empty Albania of our wonderful youth, to deliver the future of our homeland to the international mafia.

So on March 2, we enter into a new alliance to restore lost sovereignty, take back democracy, accountability and dominion of the Constitution. Albania first! Albania of the Albanians! "

And you? Would you take to the streets alongside the president on March 2? We invite you to comment.

Albanian Constitutional Court, Meta President and the recommendations of the Venice Commission to Albania

Tirana, the battle for the defense of the National Theater continues

Albania, the government cancels the fines and returns the suspended licenses to disobedient citizens

Coronavirus Albania: a thousand euros more for doctors and nurses, 500 for OSS and drivers

Albania, the prime minister against the president: "his actions are reactions to the justice reform"