An extraordinary event will be held in a few days in Asti, or better, this 20-21 September, there will be the inauguration of the first Albanian Cultural Center not only in Italy, but throughout Europe. 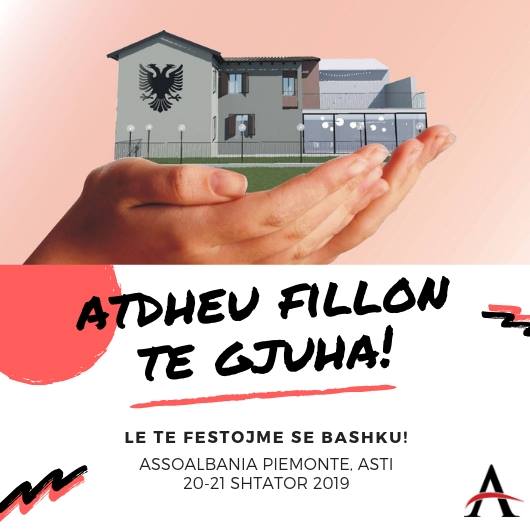 It is the first aggregation center of the Albanian community where there will be hours of Albanian language teaching for children and not only; history, geography, culture, acting workshops to sow and cultivate the Albanian word talent, dance classes, rhapsody and other instruments, film production and painting.

This extraordinary project was born from a patriotic idea of ​​seven Albanian Asti family fathers from the non-profit organization, ETS and ODV, granted by the Piedmont Region.

"L'AssoAlbania", with confidence and determination, succeeded in realizing this dream of the Albanian Community that resides in 28 years in the Municipality of Asti. They are Genc Velaj (president), Aranit Murga, Artan Sadikaj, Dede Kola, Hasan Bulcari, Marjan Bjeshkëza dhe Selami Tatani who, with the contribution of other Albanian and Italian entrepreneurs, who, for reasons of space we cannot list, have succeeded to transform an abandoned building into a jewel.

The building was given in concession by the former Mayor of Asti Fabrizio Brignolo two years ago to the association "AssoAlbania" for a time of 14 years plus other 14 years.

The architect of the reconstruction of the Cultural Center is the surveyor Rolfo Riccardo. The building has 250 m2 and is located on two floors, hosting 3 classes (capacity from 25 children per class). There is a multi-purpose hall for shows, a reception corner, a large terrace and a toilet for each floor. On the second floor there is the control room which will direct the course of the lessons in live streaming.

The total cost of the project is more than 200 thousand euros financed both by the organizers, but also by the citizens who have felt compelled to contribute to "THE HOUSE" of all who carry in their hearts their homeland, Albania. A great contribution was given by the municipal councilor Walter Rizzo, Scalzo Impermeabilizzazioni, Maurizio Servello, owner of the electrical equipment shop, Building Margherita, SCA -Asti and many others.

The Cultural Center recognizes as a godmother, the actress of dramatic art Margarita Xhepa, well known in Albania, of which it also takes its name.

This was because she was the first actress who wrote a letter of encouragement two years ago to the first children who began to learn the Albanian language. He also gave them a CD of fairy tales engraved with his voice. For two years, the “Udha e shkronjave” school (La via delle lettere), was a guest in the places of the CPIA school from a project-idea called “Ura”, which in the Albanian language means one, r- root , a- Albanian.

We remind that 60 Albanian children were registered from the beginning of the first day of school. Today, however, in the third year of life, 70 children are enrolled.

In Italy with the Asti school, 42 Albanian language schools are registered.

A detail of this school is the teaching of the LIS language (Italian sign language) to children for the deaf and dumb. So they can help others in airport and railway centers for international communication).

Instead, artistic director of the Cultural Center is Hasan Bulcari, who directs a team of 6 teachers (Irina and Eva for dance, Kristian and Ndue of rhapsody instruments, Arba del violino and Ilir di pittura).

Time to be set in the afternoon.

The inauguration of the "CASA" of all Albanians includes a mega party organized by the President of the AssoAlbania Association and all the organizational staff on 21.09.2019 day at 10.30.

Participants will include the Authorities of the Municipality of Asti, the Mayor Maurizio Rasero, the Albanian Ambassador, the godmother of Margarita Xhepa, the American and Albanian Academy of Sciences and Fine Arts represented by Dr. Skender Kodra, Federated of Universal Peace in the world Gaqo Apostoli, National Center for Fine Arts and Albanian Culture, Minella Kureta, the staff of the Association "Bijtë e shqipes" of Philadelphia in America and the students of the Albanian language school, the Naim Frasheri School of Patross in Greece. The three schools form the twinning of three schools: "Udha and Shkonjave", "Naim Frasheri" and "Gjuha Shqipe".

During the two days many activities will be carried out such as: the Albanian book fair, in which 28 Albanian publishing houses participate

There will be an appointment with the writer for children Iljaz Bobaj who will give 100 books to children. The meeting will be moderated by Tonin Nicolli.

During the 21 evening, we will serve typical Albanian cuisine, accompanied by a concert in which the small artists of the school and of great known Albanian artists of national fame will perform.

On the evening of 20 September there will be a gala evening at the "Lago di Codana" restaurant in Montiglio, where there will be many awards. The next day, guests will be guided on a visit to the historic centers of the city Accompanied by Armando Brignolo, historian and journalist of the Press.

The local and Albanian press, the "Top Channel" TV and the documentary journalist Marin Mema, TVSH, and Radio Kosova with journalist Vera Pela will be present.

In the rooms of the Center will be exhibited paintings by the Albanian painter Elona Marika who lives in Piacenza and popular costumes from the "Popular Tradition" Foundation of Edlira Sulaj da Tirana.

The strong message that the Albanian community wants to convey to its compatriots around the world is that if you believe in a dream, that will come true:

Preserving the language and culture of a people is a duty, a mission that we must pass on from one generation to another, as the fathers of the nation taught us.

Northern Macedonia, Zaev: we will review the Albanian language law

Bergamo, the silence of the city

Iskander launches the contest "Far from my land"