Padua, 11 March: a conference dedicated to the independence of Kosovo

The Italian-Albanian Cultural Association "BESA", to celebrate the 10 years of Kosovo's independence, organizes: Sunday 11 March 2018 at 10.30 at the Sala Carmeli, in Via G. Galilei, 36 - 35121 Padua, the conference "The History of Kosovo, part of the history of the Balkans - 10 years of independence" 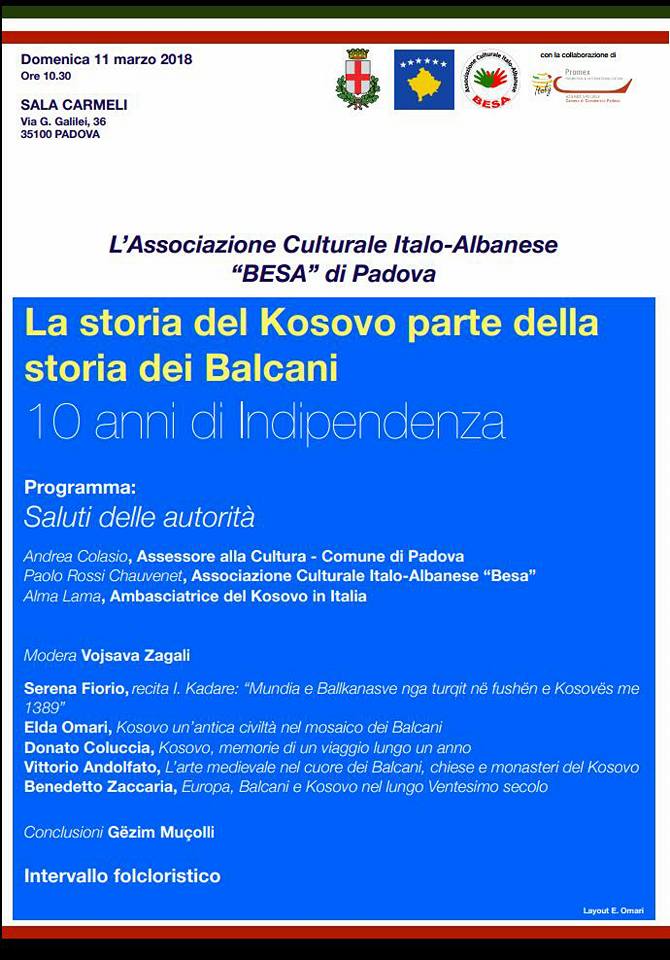 The 17 February of 2008 in Pristina the independence of a territory with an Albanian-speaking majority was proclaimed, giving life to the youngest state in Europe, the Republic of Kosovo.

This step was taken after almost 100 years of sacrifices and struggles of his people that marked the most recent history of the Balkans. One date that everyone remembers is 1999, where even Italy participates in the NATO Alliance military campaign to stop the horrors of the Serbian army and paramilitaries, but not only; the international intervention also aims to interrupt the biblical exodus and the serious humanitarian crisis that had brought the Albanian population to the limits of the
human survival.

The recent wars in the former Yugoslavia have led several communities to take refuge in Italian territory. A considerable number of them, especially Kosovars, have lived in Padua for many years now, well integrated into the social, working and cultural fabric.

Although the State of Kosovo has only ten years of life the steps taken for the development of the territory under the banner of fragile peace are remarkable. After the terrible war and with the intervention of the UNMIK (United Nations) and EULEX (of the European Community) missions it was possible to work in an attempt to heal the wounds and to overcome inter-ethnic hatred, a goal that is not easy to achieve. The credit goes to the establishment of Kosovo which equally recognizes the same rights for citizens of all the ethnic groups present in its small territory (10.908 km2) and it is for this reason that the small state wants to be a positive example not only for the Balkans, but for the whole world; Kosovo wants to be a model of reconstruction of a multi-ethnic territory after the episodes of war.

The Padua event, promoted by the Italo-Albanian Cultural Association "Besa" under the patronage of the Municipality of Padua, the Embassy of Kosovo in Italy and in collaboration with Promex, wants to present not only the recent events of the new State, but also its secular history and culture, in the attempt that knowledge and culture can be bridges towards a better future, a future without war.