Iskander returns to the Greeks

The Iskander association organizes, on Saturday 26 October, a new day visiting Greci, a small piece of Albania in Italy

For almost a year the association Iskander deals with the promotion and protection of the Albanian historical, linguistic and cultural heritage in Campania, especially in Naples.

Following the success of the first tour at Greci last May 11, to meet the numerous requests, the Iskander association decided to replicate the experience with a new guided tour, scheduled for the next 26 October. 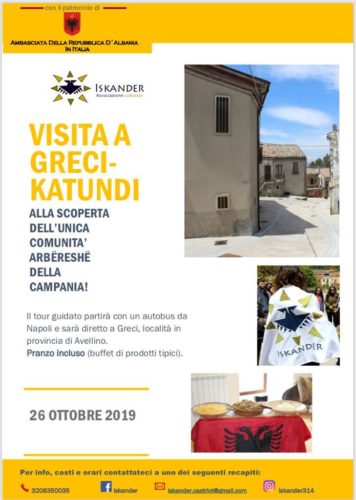 Greci is one of the arbëresh territories of southern Italy, extremely interesting from a cultural point of view. The tour, which starts in Naples in the morning, provides a real sensory experience. Popular arbëreshe music will accompany visitors along the streets and discover places of interest, while for lunch refreshments will evoke the flavors of tradition. It will be a real immersion in the past of Greci, surrounded by the green woods of Irpinia: it will go back five centuries, as if they had not passed.

A bit of history

In the context of the dispute between the Angevin and Aragonese Kingdom of Naples, the Greek-named village of Greeks assumed the appearance it still preserves today: a small piece of Albania in Italy.

In fact, Greci occupied a strategic position in the Campania region. At that time, the nearby French colonies of Faeto and Celle San Vito were filoangioine; for this reason Ferdinand of Aragon allowed the families of Albanian soldiers to build a new country in Greeks.

In the second half of the fifteenth century the re-establishment of what will be called Katundi, that is "the country", began. The families settled in the locality called Breggo, "monticello", and built the kalive or halive, or "huts". These were very modest rural houses, with wooden roofs and tiles; generally formed from a single environment, they served as both dwelling and shelter for the animals. Despite being uninhabited today, in the Breggo district and along some streets we can still see the ruins.

A very interesting chapter in the history of Greci obviously concerns traditions, especially religious ones. The Albanians brought with them the Greek Orthodox rite, which was preserved only until the end of the 17th century: the Church in fact did not tolerate the persistence of ties with the patriarch of Constantinople. Nevertheless, songs, music and popular rituals still remain from the original traditions. We can also visit the Church of San Bartolomeo Apostolo, where the Byzantine rite was celebrated at the time.

To participate fill in the form

Iskander launches the contest "Far from my land"

After 20 years, the murderer of Hyso Telharaj extradited to Italy

Albania-Italy: collaboration between the State Police and the Guardia di Finanza continues

Di Maio in Rama: approve the electoral reform before the summer holidays