The students of the Albanian language school "BESA" in Rome, on Sunday 31 March received the visit of the Ambassador of Albania in Italy, SE Anila Bitri. The Bitri Ambassador was welcomed by the president of the Association of the Albanian Community in Italy "BESA", Edmond Godo who accompanied her to the room used as a class at the sacristy of the church of the Albanians of San Giovanni della Malva in Trastevere.

The warm welcome of the children and their families was the demonstration of how welcome and felt his presence was. The teachers, Eliza Çoba and Irma Vata, presented to SE Bitri the works carried out by the children including a welcome poster for the Ambassador in their native language, signed by them, and on which she herself wrote a dedication of thanks.

Later, the children, visibly moved, presented themselves and demonstrated the skills acquired in the Albanian language in a small performance with Albanian songs and poems learned during the lessons.

The Ambassador participated enthusiastically in the lesson and interacted warmly with the children and their families. Speaking with the parents of the students, SE Bitri underlined the competence with which the Albanian school "BESA" in Rome carries out its mission of preserving and promoting the Albanian language and culture, ensuring the support of the Albanian Embassy in Rome, and hoping for an eye of respect for the institutions at home for educational institutions abroad, in view of the crucial role they play in the transmission of the Albanian language to the second generation of Albanians, who are increasingly already born Italian citizens. 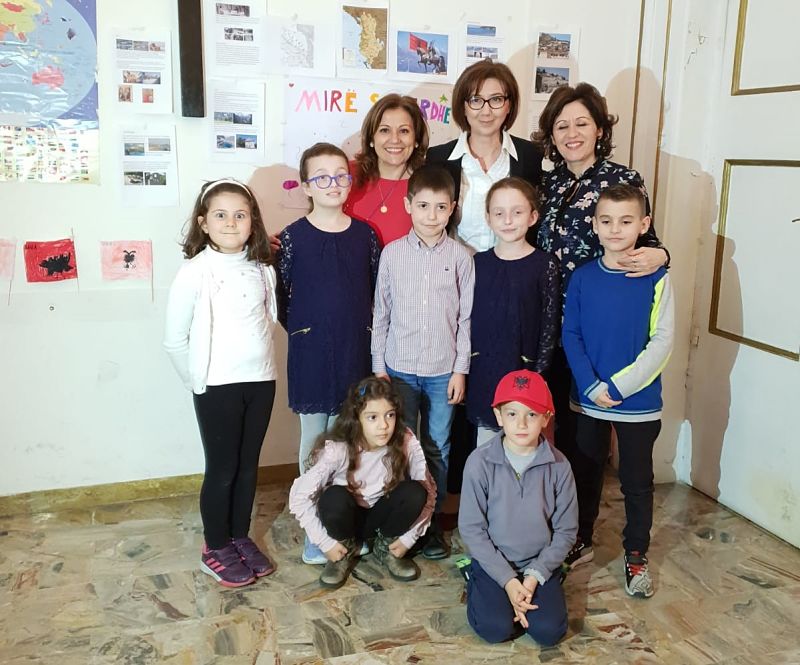 SE Bitri also participated in the Mass in the Albanian language, where she was invited to greet those present and, once again, underlined the fundamental importance of the Albanian language schools in Italy, as a bridge between the two cultures that now coexist in the identity of the Albanian diaspora in Italy. In thanking for the warm and emotional reception, he did not fail to express his awareness of the sacrifices and dignity with which the school carries out its mission.

Don Pasquale Ferrario, the rector of the Church who generously made the church's sacristy available for the school's educational activities, gave a speech of thanks and greetings to the Ambassador.

In conclusion of the beautiful day, those present were invited to a buffet prepared by the children's parents, where there were also typical Albanian dishes that made the atmosphere even more festive. In memory of the visit, two books, collections of legends on Berat and Tomorr by the author Çlirim Mukli, grandfather of one of the school's students.

The enthusiasm of those present and the emotion of the children highlighted the importance of feeling the closeness of the highest representatives of our country in Italy, and above all the need to work together with coordinated and targeted efforts to have positive results in the mission and common aspiration in the conservation and promotion of the Albanian language and culture among the second generation of the new Albanian diaspora.

Elsa Lila, the 16 November in Rome in a double concert in the dark