Albanian stars in concert at the Vatican to commemorate Scanderbeg

From Ermal Meta to Dua Lipa, passing through Kledi Kadiu and Lorik Cana: a star cast for the concert 'United in music and in memory of Scanderbeg'.

The event will be inaugurated by Cardinal Pietro Parolin, Vatican Secretary of State, on the occasion of the closing of the Scanderbeg commemorative year, which will be celebrated on the same day with a meeting with Pope Francis.

Giorgio Castriota Scanderbeg is considered the most important figure in the history of Albania, a symbol of unity and strength of the nation that unites the Albanians without distinction of religion. To celebrate his memory, the 'sons of Albania' will meet in Rome between today and tomorrow.

Among the representatives of Albania, there will also be Cardinal Ernest Simoni, the only priest still alive of the persecuted by the communist dictatorship.

The Albanian state authorities who will be present, on the other hand, are the head of the Albanian parliament, Gramoz Ruçi and representatives of the Parliament: the Minister of the Diaspora, Pandeli Majko, the Minister of Education, Lindita Nikolla, and all leaders of the various religious doctrines present in Albania.

In the 1968, in the 500th anniversary of the death of Gjergj Kastrioti Skanderbeg, the Albanians of the Diaspora were welcomed by Pope Paul VI in the Vatican, while Albania was under the communist dictatorship. Today, for the first time, representatives of the Albanian people - about 200 people - will finally be able to meet the Pope.

On Tuesday 20 November, instead, at 10: 00, the Albanian delegation will be welcomed at the Magistral Palace of the Sovereign Order of Malta, with which Albania has kept the reports from the 1994. 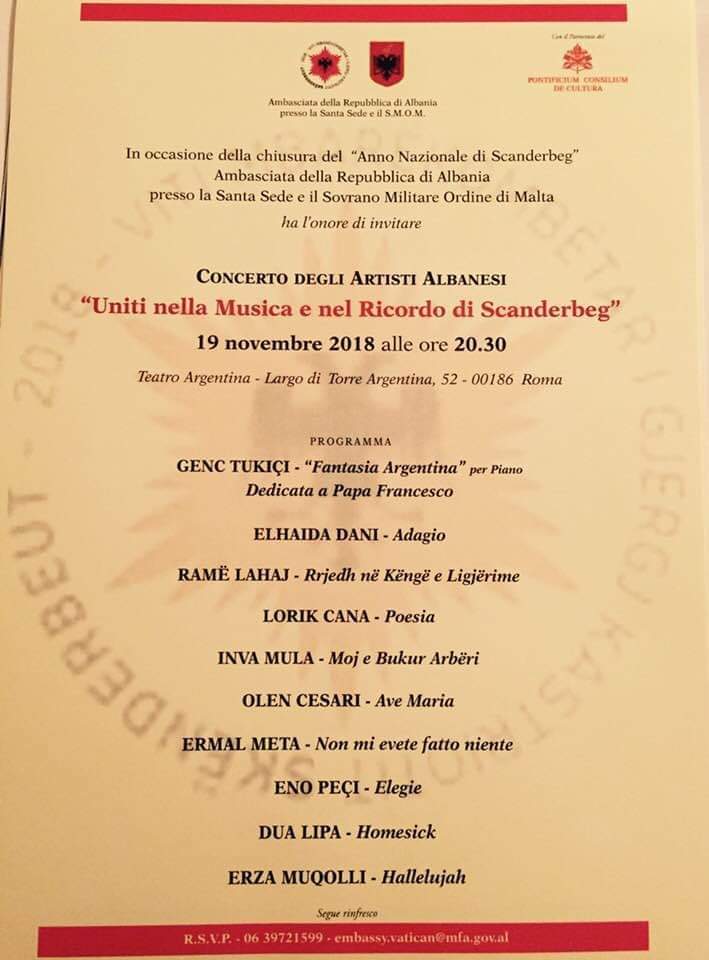 Thanks to that dream that never existed

Praise to normality, the new single by Renga and Meta

In the Belluno area, the only monument built in Scanderbeg alive