Elsa Lila, the 16 November in Rome in a double concert in the dark

Particular exhibition, the one that will see the Albanian singer Elsa Lila as protagonist on November 16 at the Rome Forum Show.

The heart of the musical evening, the STABAT MATER by Giovanni Battista Pergolesi, whose twelve tracks will be interpreted musically by the Albanian singer, accompanied by her quartet, in the scenography created with the artist's visual installations Guendalina Salini.

The concert, repeated on two shifts, one at 19.00 and the other at 20.30, is an audio and video amalgamation dedicated to the farm laborers who lost their lives in the fields. And the STABAT MATER, as born as sacred music to accompany the liturgies of Holy Week, lends itself well to conveying that sense of pain of Mater earth that mourns his children, like the Virgin who was grieving at the foot of the cross (the translation of 'Stabat Mater') crying the dead son. 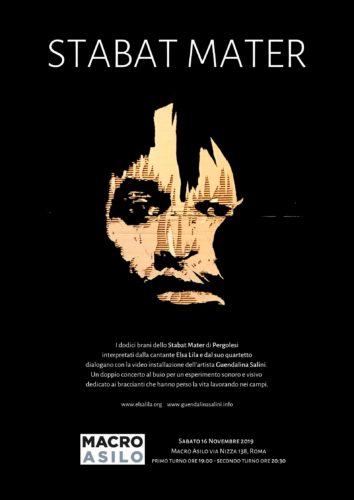 Who is Elsa Lila

Born in Tirana in the 1981, her family's musical roots led her to enter the world of seven notes at a very young age.

In the 1996, when she has only 15 years, she wins the National Festival of the Albanian Song, which ensures her fame to perform dozens of concerts and participate in radio and television broadcasts.

In 1997 he arrives in Italy. A stranger to us, even though she is very famous in the Balkans.

The occasion to make itself known to the Italian public comes in the 2003, when it presents itself at the Sanremo festival bringing the beautiful song Valeria, dedicated to the theme of friendship.

In the same year he published the album for the Italian market hilt.

The long-standing musical collaboration he established with the Italian singer-songwriter Enrico Ruggeri, with whom, in December 2008, duet, both in Albanian and Italian, in the song Fluturimi was well known to both the Italian and Albanian audiences. i fundit (final flight) at the 47 Festival of the Song in Tirana, of which she was also the presenter.

The song, as well as being included in the soundtrack of the film East West East - Final sprint by the Albanian director Gjergj Xhuvani, it was also published in the album All-in-The last folly of Enrico Ruggeri

A marrow transplant for the little Aria

Goodbye to paper. Albania takes the step towards digital also in health

The landing of the "Vlora" and the figure of the Mayor Dalfino. A project of two twin works between Italy and Albania

Italians in Albania, vote for the referendum. The indications of the Embassy