Bashkim Sejdiu he is an Albanian from Kosovo, living in Varese. He arrived in Italy at the age of ten, in the 1993.

Graduated in the beautiful country, in 2014 he gives life to an application, InfoStranieri , a start-up with a social vocation, to simplify the life of regular foreigners in Italy, in tearing down the walls of the Italian bureaucracy, starting from the residence permit up to the practice of obtaining Italian citizenship and other information depending on the various user needs.

The App "InfoStranieri" by Bashkim Sejdiu, Albanian from Kosovo, adopted by Varese

He put it in the network in ten different languages. After having opened a study for bureaucratic practices in support of foreigners, he also opened the first Albanian association in the place where he lives, in Varese, since Varese counts Albanian 12.000 well.

Parallel to the completion of the application InfoStranieri of itself, focused on the bureaucratic support for regular foreigners of different ethnic groups present in Italy, Bashkim has recently also created another option, adding the section “Health”In the existing application. 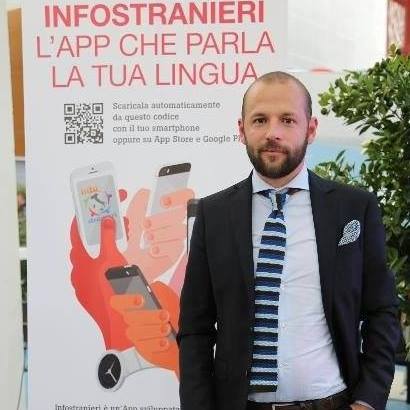 The latter, in collaboration with the Ats of Milan - Health Protection Agency of the Metropolitan City of Milan - which focuses on prevention and aid addressed to foreigners, this time from the point of view of health and in particular, information on symptoms , risk of predispositions, request for check-ups and vaccinations for tuberculosis.

In the province of Milan an 60% of cases of tuberculosis on immigrants has been reported. So, with this application you come to support foreign users with all the necessary information on the disease and on the appropriate contacts that they should request in case of need. The project has been implemented in (ten if Italian is also considered) ten languages.

Today Bashkim is a guest of Albania News.

It is easier for Italy to talk about the success of singers or dancers of Albanian origin. In your case, on the other hand, how was your innovative idea and the creation of the Infostranieri App accepted at an Italian institutional level? Have you found what feedback? The realization of your innovative project, got support from the Italian institutions or, ironically, an App created to break down the bureaucracy, is it really with the renowned Italian bureaucracy that had to do its own accounts?

My idea of ​​the App, I must say that from the beginning it has had a great welcome in the various Italian institutions, telling me that it was really a great idea that served the country, immigrants and that much sought after integration path, confirming all this I have been quoted several times also by Renzi and various Ministers of both the "left" and the "right", as well as having the patronage of the European Parliament to then make the presentation of the project to the Chamber of Deputies. 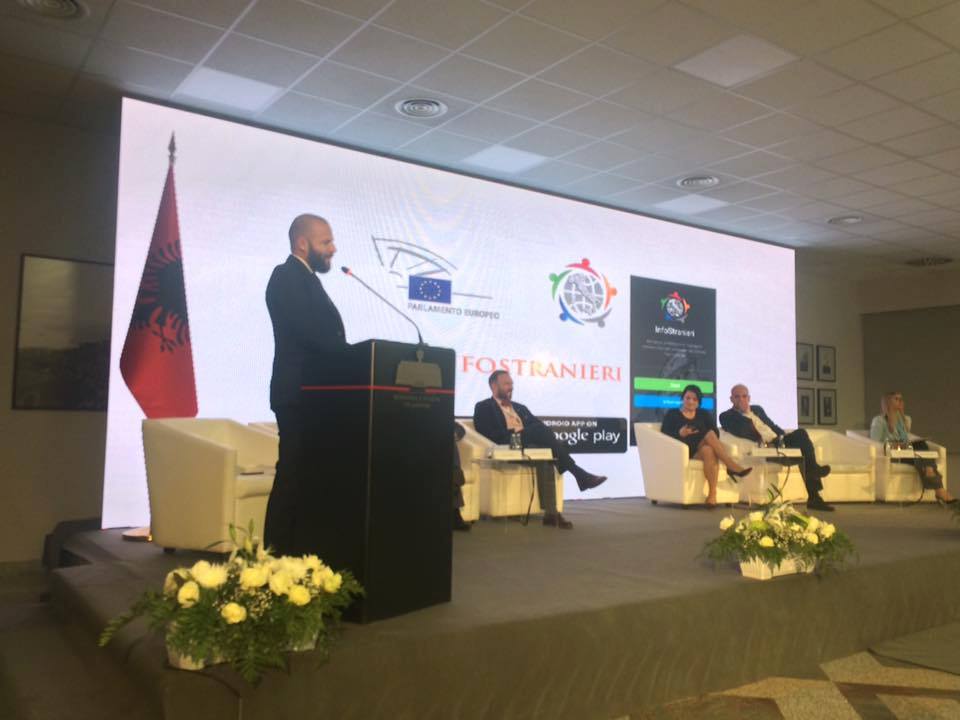 Inside of me, I was really happy with this support and I thought that we would be really available to do something concrete, for the good of all, but unfortunately the reality is very different, all what I told before was just a way for them people / organizations to show that they follow the problem, but when it came to working intensely and implementing changes in certain dynamics for the better, availability was not so immediate.

The irony of fate, in fact, is to ask for support to break down the bureaucracy, precisely to the people / bodies that increase and feed it every day.

But let's say that once the illusion of the early times is over, back to reality, I started to work hard again and to make sure that one day you can not do without considering my App as a necessary and indispensable means to solve and improve indeed, once and for all, the bureaucracy in the field of immigration, which I am convinced is the major cause of a lack of integration.

The InfoStranieri App was born in 2014 with the intention of helping regular foreigners in Italy to break down the walls of the bureaucracy and to streamline the practices for obtaining Italian citizenship, etc.

From its inception to today, what is the relationship between the expectations that you had placed on your invention, with the actual feedback obtained from the user, to whom it was addressed?
Have you ever thought of improvements or updates, of any changes to the functionality of the Infostranieri App?

The Infostranieri App was created from my personal and professional experience in the field of immigration, and not only was it created for citizenship practices, but an effective and effective support to know which documents are necessary, the economic requirements to start from the Residence Permit, Family Reunification up to the Citizenship, all in 10 languages ​​always updated and at hand in any eventuality.

Furthermore, with regard to these practices we have digitized all the request forms of these inter, to date only in Italian and often in paper form, and made into User Facility in 10 languages, ready to dialogue with the various institutions, but to date these agreements are still in standby.

We also have a section for associations and embassies and consulates, which are an important and fundamental piece in the life of every immigrant.

To date, without paying but by word of mouth marketing, we have 10 thousand active users, with an average of 40 / 50 interactions with users per day.

All this is not enough, and we are building a Marketplace of services, including commercial ones, specific to the immigration segment, both because many users ask us for suggestions in this regard, but also to ensure that the project can go ahead independently, given that he talks a lot about national and European funding for innovative projects, about social issues etc ... but up to now we haven't received even a penny.

You have received a prize, and precisely you are the first classified in "EHealth4all" , a sector-wide demonstration at national level on the topic of technology and health. This is because, in parallel with the InfoStranieri App, in collaboration with the Milan Ats, you have created the application in 9 languages, which helps foreign users to find out about tuberculosis symptoms and appropriate vaccinations, helping to improve life at these people. Are you satisfied with the success of the new project?

This award was very important, because from the fine words we went to the facts and with the "operative" people we had the right recognition of the hard work done, and above all it was the proof that this App is functional to the Public Administration and consequently it also has a positive impact on the lives of immigrants.

The algorithm created for Tuberculosis was created based on the reality of Milan, where about 60% of TB patients (tuberculosis) are foreigners, and if we were able to save only a sick person through the app, it would be a great result.

Now, we are also working on an algorithm on vaccines and the related obligations for enrolling children in school, you are the first to whom I trust this but I can not say more.

The word satisfied, unfortunately it is not part of my repertoire and my way of being, so once I reach a result, albeit an important one, I am already thinking about the next step, and the work to be done is a lot, considering that in my mind the project is still at the 10% of development.

What are your current jobs?

My commitment is only for the App. also because behind an App of this kind that replaces the apparatus of the public administration all in 10 languages, there must be a considerable structure.

There is also the whole part of participation of the events to which I am invited that are certainly very demanding, like the one that will be the 23 / 11 where I am invited to Rome by the International Press present in Italy, for a presentation of my project and to answer their questions.

In addition to this, I am the President and founder of the first Albanian Association in Varese , and with all the difficulties common to all Albanian associations, I try to implement the processes of integration and promotion of the beautiful Albanian realities.

How much has your image influenced, your positive and enterprising example in the Albanian community in Varese where you live, both on the Albanians themselves, and on the Italian citizenship of the place?

The city of Varese, where I live from the distant 1993, has always been considered the feud of the League par excellence, and in some respects it seems absurd that this idea of ​​the Infostranieri App was born from Varese, but I was educated and raised with the idea that if each of us respects our role and is committed to achieving a goal, which brings benefits from all sides, there will never be anyone who can prevent this.

My story and my "case" has meant that in Varese until the 2013 Albanians have always written only about the arrests and the various illegal activities, but since I founded the Association and then the App I did see and understand that the Albanians are humble people, workers with sound principles, integrated that do not forget their origins but at the same time try to be active in the place where they live to be able to thank for the given opportunity.

In Albania and in your land, Kosovo, have you been aware of these important innovations that you have achieved so far? Are there any projects or professional initiatives on your part also in your country?

Reluctantly, I say that I had more articles in the US than in Albania or in Kosovo, where there was only one article which was only copied and translated badly, released on various online newspapers, but none of the media reality in Albania has spoke in depth about the project.

While, I had the great honor of participating as a speaker at the Diaspora Summit in Tirana, where I presented my project and reiterated several times that for Albania and for all institutions I am fully available with them to create something beautiful and innovative, but we wait ...