The magazine "Drini" - History of an initiative of the 40 years

Magazine "Drini - Monthly Albanian Tourism Bulletin"Was directed up to the number 3 of the 15 March 1943 da Francesco Tagliarini, who had founded it in the 1940.

With the date of 30 March 1943 Dr. Tagliarini, Official of the Ministry of Popular Culture and Consultant for the Albanian Tourism since 1 July 1939, he left the direction of the magazine to take up another position within the ministry.

The direction of DRINI was assumed by Demir Alizotti, while Chief Editor remained Skënder Shkupi, which was so from the first issue.

Drini continued to be published monthly, in Albanian, up until the 8-9 issue of August-September 1944 and hosted articles by Albanian and Italian scholars, some of whom had worked with the magazine for years. 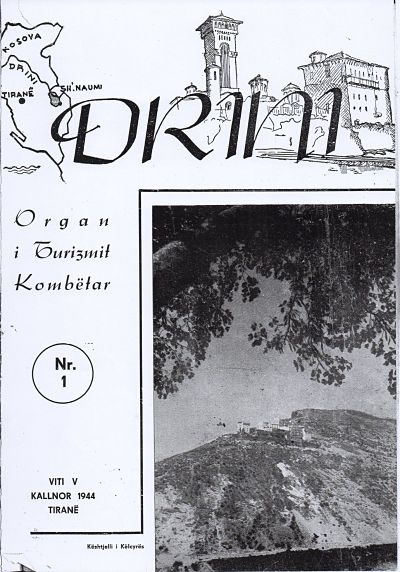 In the number 1 (January 1944) fifth edition Demir Alizotti published a long editorial entitled "At the threshold of the fifth year of publication"In which it traces a history of the publication since the first issue of the 1940 describing its editorial policy and giving a series of data and news, which - at a distance of more than 80 years - seem to be of particular interest. 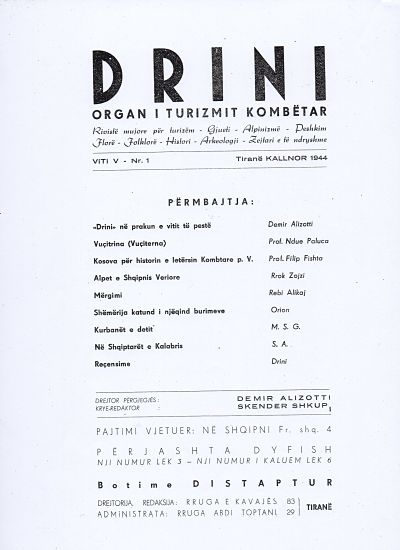 For this reason we have decided to translate and publish the article by Demir Alizotti and we want to highlight in particular the closing of the text, almost a prophetic announcement of what an important resource tourism in today's Albania would become:

"In conclusion - writes Alizotti - we are sure that one day the articles of this magazine, which at this time may seem trivial to someone, will be used to prepare every publication necessary to present, especially outside the homeland, national tourism and its merits.

The most propitious time is today: for this reason we too must prepare ourselves properly in this field after the war ”.

At the threshold of the fifth year of publication

Time and reality have shown us in many cases as in our country there are few newspapers and magazines that have had, for one reason or another, a long life and a continuous and uninterrupted edition.

The magazine DRINI, as the Albanian Tourist Board, began to be published in the first months of the year 1940, in the form of a Journalistic Agency, which provided information on the opportunities of tourism in Albania to the Italian and international press.

From the beginning and for four years in a row it was printed and distributed without any interruption or the smallest change, in the important program that had been entrusted to develop and spread news in favor of tourism, which is truly one of the national industries , but still not well known, not only by foreigners but also by the Albanians themselves.

Tourism is actually an industry and not a sentimental expression as it is interpreted by many people. It is an industry like any other, because it develops and spreads in a free and competitive regime.

Thanks to this base, every nation prepares and propagates with every means inside and outside the state the riches and tourist values ​​it has.

Faced with this undisputed fact, the Directorate of Tourism, since its establishment, began to publish this official press, with the purpose and the task of spreading and making known the tourist treasure that nature has given to Albania.

DRINI came out for the first time in February 1940, with a specific program and a selected content written by numerous and valid collaborators.

In the magazine, during the four-year period, 298 articles were published, with different tourist themes and within the framework provided for by the program.

For three years Drini was printed - in addition to an edition in Albanian - also in foreign languages, French, German and Italian.

When the situation allowed this official and unique organ for national tourism propaganda, it was widespread and distributed not only in many European countries; but also up to Calcutta in India, in America etc.

From the notes it appears that 27.110 copies of this magazine have been distributed in Albanian in four years; 29.290 in Italian and, in three years 4.095 copies in French and 3.965 copies in German.

In the 1943 this periodical, with the help of many collaborators, began an extensive campaign on Kosovo. But this campaign has always been carried out within a specific program, so that the picturesque, historic and touristic places of the Albanian Cossovo were known both outside and inside Albania; as luckily for the Albanians who do not know the beautiful places of Kosovo and their splendid panorama, after so many years of occupation, good fortune meant that this great and prosperous region was united with the Homeland of Albania.

DRINI in his program as the first point has as its national task to describe in any way and publish many and many articles on tourism issues on Cossovo, Dibra, Struga, Plava, Gusija, Ulqin etc.

In order to best achieve the goal and achieve this national desire and task, we need the support and continuous collaboration of Albanian intellectuals and writers.

Being convinced in this cause with uninterrupted enthusiasm we will continue in our path with the aim that many hitherto unknown tourist treasures are known today by the Albanians and tomorrow by foreigners.

In conclusion we are sure that one day the articles of this magazine, which at this time may seem futile to someone, will serve to prepare each publication necessary to present, especially outside the homeland, national tourism and its merits.

The most auspicious time is today: for this reason we too must prepare ourselves properly in this field after the war. 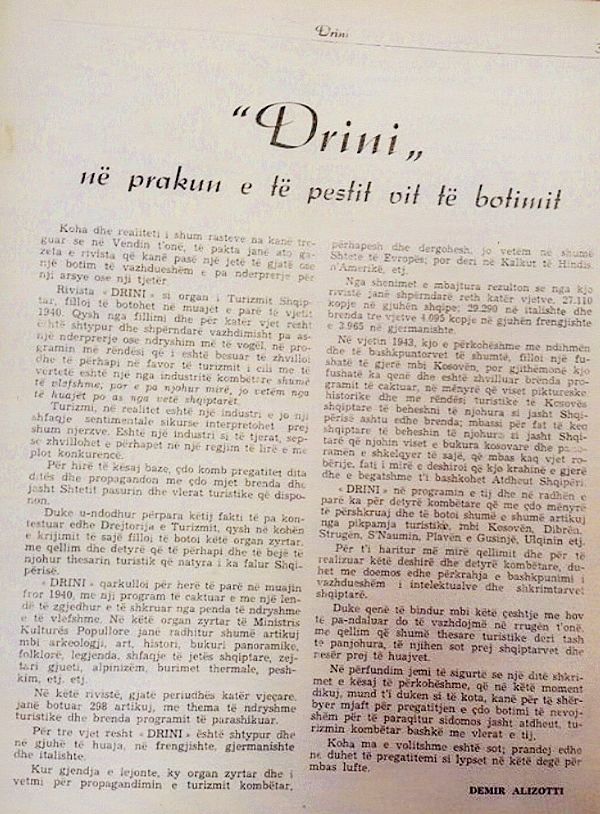