The general of Tovoli, a story of denial

The film "The General of the Dead Army" by Luciano Tovoli, based on the novel by the same name by Ismail Kadare, has been projected in Albania to almost 40 years after its realization. The director Pirro Milkani recalls the censorship of the film during the dictatorship.

The film "The General of the Dead Army" by Luciano Tovoli, based on the novel by the same name by Ismail Kadare, has been projected in Albania to almost 40 years after its realization. The director Pirro Milkani recalls the censorship of the film during the dictatorship.

On the occasion of the 85 birth anniversary of the French actor Michel Piccoli, the 27 last October, the Albanian Film Archive, screened the film for director students and cinema lovers, "The general of the dead army ”By Luciano Tovoli, in which Piccoli is one of the protagonists.

It took almost 40 years for LucianoTovoli's general to be revived by Albanian cinemas. It is the Albanian director Pirro Milkani who tells the troubled story that the Italian director had during his attempt to shoot the film in Albania. Milkani, together with Vasillaq Çollaku, official of the Central Committee of the Party for foreign relations, accompanied Tovoli and Piccoli during their inspection in Albania. Filming would have been carried out in Albania, a truly ambitious project.

The French and Italian states invested in the film. They interpreted big names of European level and with an 30-ennale experience like Marcello Mastroianni, Michel Piccoli, Anuok Aimée, Gérard Klein and a very young Sergio Castellitto.

The director of the state-owned production studio, the so-called Kinostudio "Shqipëria e re", Vangjush Zallëmi, was given the order by the Central Committee to suspend the realization of the project and the start of filming. One of the many "missed opportunities" for Albanian cinema, defines Milkani. Based on the novel by the Albanian writer Ismail Kadare, "The General of the Dead Army", written in the 1962, it was decided to carry on the film project in Italy.

Because of this new situation, the director Luciano Tovoli, co-scriptwriter with Piccoli and Jean-Claude Carrière, varied the course of the story narrated by Kadare, including the love story.

General Ariosto (played by Marcello Mastroianni) is not just an official in charge of coming to Albania to look for the remains of soldiers who died during the Second World War, but also a man with a private life. 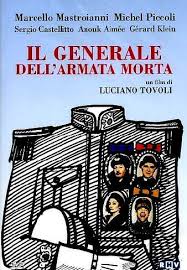 He is in love with the Countess Betsi Mirafiore (Anouk Aimée) and becomes jealous of the approach between the priest Benetrand (Michel Piccoli) with the wife of the blue battalion commander, Salvatore de Berni. The Countess Mirafiore, a beautiful and sensual woman, is good at highlighting and juxtaposing the jealousy of two men in authoritarian robes: that of the priest and that of the soldier.

Director Milkani recalls that it was thought to shoot in Albania in mountainous terrain.

The region of Korca and its surroundings presented itself as a plausible alternative, and then some shots in Tirana. One day, together with Piccolì they had gone for an inspection in Boboshtice, towards Dardha, still in the Korça region: 4 hours of walking in the snow to explore the terrain. Perhaps the graves of the French soldiers in Korca could be the right place where "the general of Kadare, found the remains of his soldiers". In reality, it was not possible to make the film in Albania.

As soon as they left Albania, the director and actor decided to shoot in one of the arbëresh countries in Italy. Perhaps for this reason, in the film by Luciano Tovoli the abandoned hills and the crystal-clear lake seem alien to the Albanian spectator. Here the general and the priest camp.

Comical figure of the priest wearing a brown leather jacket, black jacket and knee-length boots while smoking a cigar, as well as women who cross the sea in one night to come to Albania in the name of love. This is what the Countess Mirafiore does.

The general and the priest do the duty without tension between them. By day, they open the tombs, collect bones, pack them and send them to Italy. At night, they drink champagne, smoke cigars, laugh and joke with the Austrian general Krotz (Gérard Klein).

They do not care about the natives and vice versa their native ones. The two parts barely communicate with each other. Even at the end of the film where we can expect a tense scene between the drunken general and the old Albanian Nice, the dialogue between the two is normal. She asks her, "Are you the general?" He replies: "Yes, Madam". From the woman's mouth one hears three - four times exclaiming: "Assassin".

Then he walks away. For Milkani, the lack of tension in this and other scenes led to the failure of the film, in addition to the economic damage to Tovoli who is supposed to have invested all his capital in the "General of the dead Army". "If Luciano Tovoli had filmed it in Albania with the Albanians, there would have been no errors in the film that would have been a success. He had good drama, good actors and perfect technique"Says Milkani and reiterates that Luciano Tovoli with his excellent staff had confidence in the" General ... ".

The novel "The General of the Dead Army" by Kadare was staged with the same title as a theatrical show (1985) and as a feature film (1975), respectively by Albanian directors Pirro Mani and Vladimir Prifti.

In Prifti's film, which for Milkani "is of a fairly good standard", they play some famous Albanian actors such as Sandër Prosi, Pjeter Gjoka, Prokop Mima. Milkani also appreciates the production of another feature film entitled "The Return of the Dead Army" (1989) by Dhimiter Anagnosti, "in particular the scenes shot in Albania". Instead, those filmed in Italy, "due to lack of traditional clothing, leave something to be desired. However, for three quarters the film is a considerable production ”.

The first co-productions with foreigners

During the presentation of the film, the director Pirro Milkani mentions the history of Albanian film productions in collaboration with foreigners. The first dates back to the 1952, in the period in which the "Kinostudio" was inaugurated, with the film "Scanderbeg", an Albanian-Soviet co-production by director Sergei Yutkevich.

In the 1959, the second collaboration with the Soviets is realized: "Furtuna" (The storm) of the directors Kristaq Dhamo and Yuri Ozerov.

The film was shot in Albania and the decorations were made in Moscow. With the breakdown of relations between the two countries, the cinematographic collaboration also ended, and consequently also the artistic training of Albanian young people in Russian academies.

After that, thirty years of isolation followed and as director Milkani recalls: "no collaboration or production with foreign companies was imaginable". The first sign from the West arrived on the novel "The General of the Dead Army". It is a special case, since it is a film with an Albanian plot that could not be filmed either in France or in Italy.

As already mentioned, the shooting was prohibited by a dry order of the Central Party Committee given to the Director of the "Kinostudio": "You will not help the French team coming to Albania ...".

In Albania, the government's struggle against opposing groups had escalated enormously.

With the elimination of Prime Minister Mehmet Shehu in the 1981, it was thought that everything was over, but in any case, the group of Kadri Hazbiu, Minister of the Interior at the time, had to be condemned as well, and Communist officials did not want to have in their feet forty-fifty foreign filmmakers who could see what was happening.

On the other hand, as Milkani recounts, foreign artists took care not to have contact with others.

One case among others is an exception. During a visit to Albania, actor Bekim Fehmiu expressed a desire to play Scanderbeg in another film about his figure. "His was just a wish. He dreamed of making a movie on Scanderbeg, but that got us in trouble. My team and I have been called to the Central Committee of the Party who asked us who he had promised to Fehmiu its realization.

The truth is that we could not promise anything because another film on Scanderbeg could not have been filmed at that time, let alone now ”, concludes the Albanian director Pirro Milkani.

Three books that tell about Albania

Today is the birthday of Kadare, the genius of Albanian literature

Inside the Ismail Kadare house-museum

Nuestadt prize for literature: the winner for the 2020 is the Albanian writer Ismail Kadare