Same sea and same climate. This is what makes Albanian and Italian cuisine quite similar, which can certainly be defined as Mediterranean.

This also means that, thanks to the gifts of Mother Nature, fruits and vegetables are abundantly present and facilitate the nutrition of those who have chosen the vegetarian style.

This is a question that often turns on Facebook pages and groups in the summer, when many Italians are also preparing to leave for the Land of the Eagles: are there places where vegetarians can eat without problems? And how well known is the world of vegetarianism in Albania.

What does a vegetarian eat?

Everything that is fruit and vegetables, cereals, legumes and vegetables with the inclusion of only animal proteins deriving from milk and eggs. More properly we speak of lacto-ovo-vegetarianism. Vegans, on the other hand, do not eat any type of food of animal origin. Not even honey.

How well known is vegetarianism in Albania?

In practice, that is, going to see the typical dishes of the country, Albanians have always eaten vegetarian for a good part of their diet. As a percentage, it can be said that at least 40% of the typical Albanian dishes do not contain meat or fish.

On the other hand, up to a few decades ago, meat was a luxury in Albania and one had to invent in the kitchen with the products of the earth, much cheaper and easily available.

If, on the other hand, we put it on the level of knowledge at the basis of vegetarian philosophy, perhaps we need to get to more recent times. Practically last year, when the first veg festival in Albania was organized on June 8th.

Il VegFest , so it is called, was held in Tirana at Pazari i Ri , the New Market of the capital. For 2020 nothing is decided yet, but the Facebook page of the event is currently still active. In reality it deals with more vegan issues than a simple vegetarian diet, but this can give you the idea of ​​how Albania is rather quick to adapt to the cultural and life-style movements (understood in the strict sense, in this case) of the world.

The most delicious Albanian takeaway dish is the byrek , which is a millefeuille filled savory pie. There is a version with minced meat filling but, for the most part, the fillings are very suitable for a vegetarian diet, since they consist of spinach, tomato, onion, Albanian ricotta (called gjizë). These are the common variants that you can buy in bakeries or in the so-called byrektore.

At home, you can of course space with other fillings, such as pumpkin, cauliflower or leek. Or add the egg to the dough of the filling.

They are called meze and usually when you eat at an Albanian person's house, you find them on the table from the beginning to the end of the meal. Basically, while stocks last.

It goes from the classic salad (in summer mixed with cucumbers) ai tomatoes, to the inevitable and delicious olives, to move on to potatoes, cheese white paste (dhjatë i bardhë, similar to feta, which in supermarkets is sold in rectangular shapes to be cut into slices) e kaçkavall (yellow cheese, which in supermarkets you find in round shapes such as caciotte).

To soften everything, the delicious salcë kosi, the yogurt and cucumber sauce, which in Italy commercially is better known as tzatziki. In Albania you often find both the version with and without garlic.

It can be used, for example, to dip i Turkey, generic name by which all pickled vegetables are meant. Those that end up in jars in Albania more often are peppers (peppers) and eggplants (patellxhane).

Given that pasta would be an import from Italian cuisine and, therefore, they manage to prepare it as you want (in Albania just ask ...), in the Land of the Eagles much more is used than rice.

Translated literally, rice, but here it is called pilaf, even if, from a gastronomic point of view, pilaf is the technical term that is given to a type of cooking of rice (i.e. put in the oven in a covered pan, in which vegetable broth is poured which is absorbed gradually ).

In traditional Albanian cuisine the concept of 'first course' does not exist. The same rice, rather than being eaten as a first course (in the vegetarian version you can ask for the pilaf me perime, that is, rice with vegetables), usually accompanies meat, as Balkan cuisine and, more generally, Middle Eastern cuisine would like.

Rather (of course, maybe in summer it is rare to see it eat but restaurants prepare it easily) you can opt for the legendary bean soup, the grosh. In restaurants properly so called they no longer serve it, but in restaurants taverns shqiptare (i.e. inns with typical cuisine) they serve you quietly. Be careful, however, to ask that it be prepared with only water and flavorings, because sometimes it is enriched using animal broth.

Typical inn dishes, rather than listed restaurants. Because they are a legacy of poor Albanian cuisine. We insert them as main courses, following the Italian menu sequence. But in an Albanian tavern menu you are more likely to find them among the meze.

The word fërgesë does not have a literal translation in Italian. Rather, according to the nomenclature of the Albanian dictionaries (I translate it) it is 'preparation with salted ricotta or crumbled cheese, fried with a little tomato and spices'.

The classic version provides that the main ingredient is meat or liver, but there is also a vegetarian version that contemplates the use of peppers and onions.

The final consistency of fërgesë is that of a rather thick cream. It can be accompanied with toasted bread or with a piece of byrek.

The speca të mbyshura are the classic stuffed peppers. While in Italy the original recipe always includes minced meat, the Albanian one also has the vegetarian version. The stuffing of peppers will be the classic rice, tomato, garlic and onion, various spices, including oregano and, sometimes, even mint.

Especially in home cooking, it is not uncommon to find that peppers are replaced by eggplants, made like us in a boat.

Lo japrak is the roll of vine leaves or cabbage, stuffed with rice and herbs, typical of Balkan and Central Asian cuisine (the ancient areas of extension of the Ottoman Empire).

Those who turn to ethnic restaurants in Italy may have found it on the menu under the name of leaf, filling o sarma / sarmale and may have also tasted variants stuffed with minced meat, while the Albanian version is exclusively vegetarian. 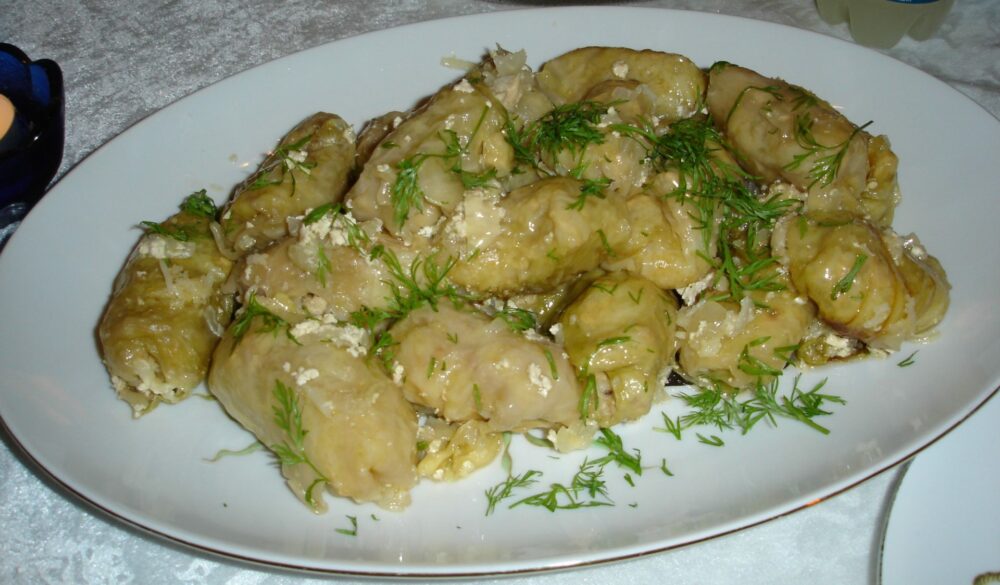 If you find yourself near Gjirokastër, you can't not try the qifqi, which are vegetarian meatballs typical of this location, made with rice, egg, mint, salt and pepper.

If possible, accompany the tasting of these meatballs with dhallë, drink based on yogurt, water and salt.

So, to sum up, does anyone still have doubts that vegetarian food can be eaten in Albania? We don't really believe.

Visiting ricette.albanianews.it you can read some of the typical recipes of Albanian cuisine.

In San Gimignano a charity dinner, prepared by Albanian chefs residing in Tuscany

The dinner will take place on January 31, at the San Martino 26 restaurant, and the revenues ...