Antigonea of ​​Albania, the ancient city dedicated to love

In southern Albania, near Gjirokastra, you can visit the ruins of the ancient city of Antigonea, built to represent the love of King Pyrrhus for his first wife.

The monuments built to celebrate love are among the most incredible in the world: just take a look at the mesmerizing Taj Mahal for immediate confirmation.

In Albania, one can find not only monuments but even the ruins of an entire city dedicated to love, the love of King Pyrrhus of Epirus. This king founded Antigonea in the 295 ac, thus calling her to honor his first wife.

The ancient city of Antigonea, founded by Pirro di Epiro

Anigonea had an area of ​​approx. 45 has, was surrounded by strong walls, about 4000 m long, which defended the city from all sides and above all to the south and to the west where, due to the nature of the territory, they risked more. It had a dominant position and also economically speaking the most suitable of the valley, factors that helped the city to develop as the most important center among the other inhabited areas.

The archaeological city of Antigonea rises on the hill of Jerma, to the right of the Drino river, to the southwest of the village Saraqinishtë in the province of Argirocastro. It extends between two high peaks between the 600 and 700 with peaks and terraces on the summit where traces of the buildings are clearly visible.

In addition, the signs of great destruction caused by a large fire are evident, must have happened in 167 ac, when the Roman consul Paolo Emilio had 70 burned and destroyed city of Epirus. After this tragic event the Antigonea never recovered.

The first archaeological excavations were undertaken just before the Second World War and discovered a very rich material that radically changed the opinions on the city. The identification took place through the discovery of round bronze tiles bearing the word "Antigonean". The archaeological and urban elements are also of particular interest. Prof. NGL Hammond, who visited the relics of Jerma in the 30 years, wrote in detail. 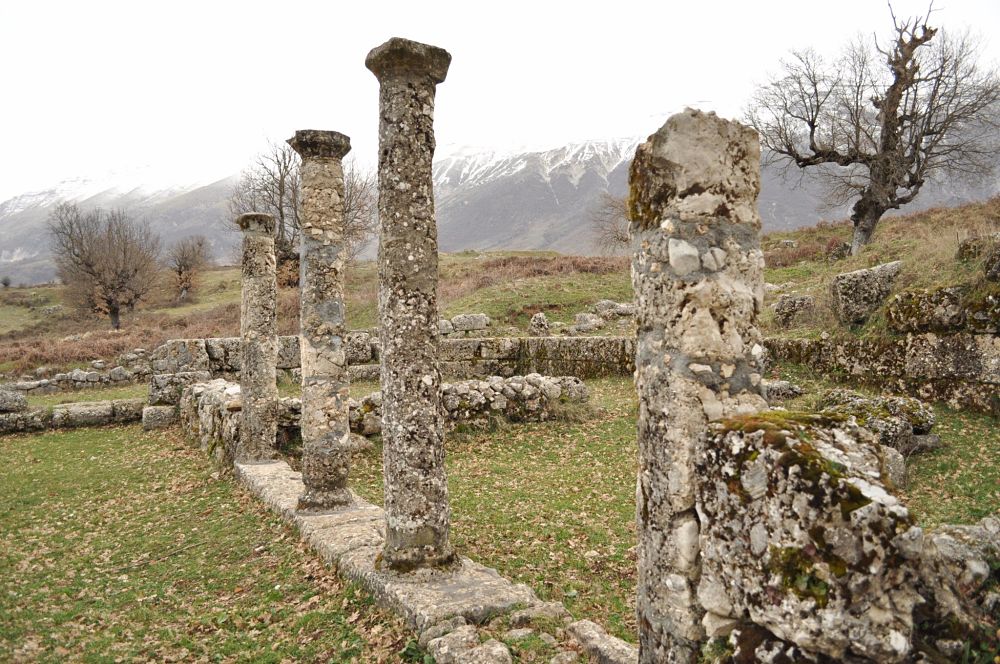 Antigonea is located only 14 km east of Gjirokastra, near the village of Saraqinishte in the Drino valley. The archaeological park allows the visitor to closely observe the history of an ancient city; despite its short flourishing period (second-third century BC) the city was an important political, cultural and economic center for the whole region. However, the city was destroyed by Roman troops in the 168 ac in an extremely violent short period of time.

A significant part of the town's fortification has survived intact over the years, revealing the magnificent resistance the city once had. The ruins of Nimfeum together with the columns, the waterfront, the splendid apartments of the peristyle and many other public structures, faithfully transmit the atmosphere of antiquity, instantly transporting the visitor to another world. A must-see in Antigonea is the early Christian mosaic: this particular mosaic serves as a historical bridge between Christianity and the later stages of European history. There are several ancient churches near Antigonea that are worth a visit, especially the church of San Koll, built in the 1680.

As you approach the ruins of this ancient city, you will notice its dominant position over the whole valley. Here, the visitor can completely absorb the spectacular view of the mountains and the incredible surrounding nature. But the journey through history does not end in the ruins of the ancient city of Antigonea. In fact, along the entire Drino valley, you will find the ruins of fifteen ancient urban centers, the most important being that of Adrianopoli.

Centennial photography and its history that with nobility win back Gjirokaster