A collection of Albanian folk songs by the Albanian musician and composer Pjetër Dungu, published in Tirana in 1940 by the DISTAPTUR Editorial Body.

The volume of the Albanian musician and composer Pjetër Dungu LYRA SHQIPTARE with the Albanian subtitle KÂNGË POPULLORE TË MBLEDHUNA NEN KUJDESIN AND RADIO TIRÄNES (and in Italian Albanian folk songs collected by Radio Tirana) - published in 1940 by the ENT Agency - established on the initiative of the Directorate for Tourism, Press and Propaganda of the Presidency of the Council of Albania - is the first collection published in Albania of Albanian folk songs, collected by Radio Tirana.

Recall that the DISTAPTUR editorial body and its activity in the years 1940-1943 was the subject of a recent article in Albania News, to which we return the reader.

The book - which contains 50 popular songs - has a presentation and a preface in the Albanian language with Italian translation, while the lyrics of the songs are in Albanian with the translation of the title in Italian.

The author, Pjetër Dungu, born in Shkoder in 1908, was a pupil of the composer Martin Gjoka and played the oboe and trumpet while studying piano and harmony.

In the 30s he had a notable reputation as a piano accompanist for popular songs. In 1942 he accompanied the tenor Kristaq Antoniu on the piano for the recording of eight popular songs for the Columbia Recording Company, also conducting the orchestra.

«For a long time I wanted - Pjetër Dungu writes in the presentation of the book - to make a collection, albeit limited, of popular songs, although the opinion of many judges our songs as imported and not an expression of the Albanian soul. That our songs have oriental and Balkan influences in some places cannot be denied, as indeed this happens in all Balkan folk songs. The greatest difficulty of this transcription - since they are all songs collected by the singers' voice - I found it in setting the rhythm, which is in complete contrast with the usual Western times and rhythms.

To do this I had to personally take part in groups of popular singers, thus managing to grasp more or less the right time and rhythm of these songs.

To achieve this, I would have to go around all the regions of the country, in order to collect the various melodies on the spot. This difficulty would have prevented me, for reasons of work, from reaching my goal. Fortunately for me, Radio Tirana allowed me to carry out this collection without having to move within the country.

In fact, I had the opportunity here to be in contact with the various singers of all the provinces who take turns at the microphone, thus achieving the desired purpose in recent times. 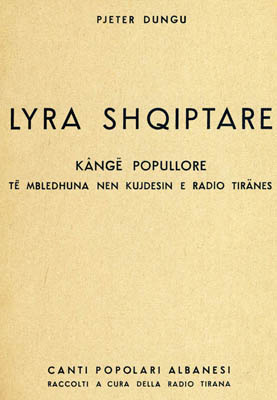 This collection - the author concludes - does not claim to be complete or perfect. It is only a raw material which, however, represents the expression of the Albanian soul and that others will have, as I hope, the opportunity to elaborate, creating on this basis the Albanian national song ".

The large preface is entrusted to prof. Filippo Fishta, of which we report an extract:

«The compilers of the volume« The Treasures of the Nation », published on November 28, 1937, had prepared with this work the material that would have required any collection of Albanian popular melodies, but this plan was not fully completed. From "The Treasures of the Nation" only the first volumes were taken: heroic songs, chivalrous songs, legends, rhythms, love songs.

Over time, some national melodies were collected, but many of them remained in the manuscripts. Such popular music also found some amateurs in the international musical world.

It has been said that the interest in music is a matter of past times among Albanians. Scutari and Coriza, these two centers of Albanian culture, have long since organized musical societies.

Shkodra more, as the center of a great "Vilayet", until the Balkan war made the artistic contribution in this field also to our brothers who were part of the Ottoman Empire, that is, to the members of the "Vilayet" of Kosovo. Shkup, Giakòva, Prizrend and other cities, have long since adopted the melodies of Shkoder; the manuscripts of notes of the masters of this city were transcribed and became material of the musical societies of the Albanian element of Kossova.

The disappearance of the generation of Shkodra has had, among its teachers, Frano Ndoja and Palok Kurti, organizers of choirs of a predominantly religious character. The master Scutarino Gaspare Jacova Mercuri had been trying for some time to collect these popular melodies of our country, to transcribe their notes and compose alongside them, in addition to the verses, also other melodies drawn from the inspiration of Albanian popular music.
The organization of the orchestras begins with the creation of the Marian Congregation of Shkoder - in 1875 - and with the opening of the Saverian College in Shkoder.

Two commemorative publications of a few years ago, published in the Typography of the Immaculate Madonna of Scutari, mention names of masters and documents of the time. At that time, the Franciscan Tommaso Marcozzi (1878) also took an interest in the formation of choirs. It can be said that the walls of the Convent of Shkoder gathered the beginning of an artistic activity in this city with such a happy past.

On the other hand, also this "hearth of Albanian culture" - as the Franciscan Convent was called by Father Fulvio Cordignano - found diligent teachers, especially in Father Martino Gjoka, who died recently. Among the pupils of Father Martino was also the collector of the songs published in this volume, Pietro Dungu.

However his work is valued, the author of this collection can be proud of the fact that he presents himself not with one or two songs, but with as many as 50 songs, where you can find a good part of the Albanian popular melodies. With this, Master Dungu fills the gap I mentioned above by talking about the non-publication of the National Melodies and opens the way to other works of this genre. He or some other person may take on the task of continuing the work started.

For some time, Albanian popular music has started to arouse interest also in the foreign artistic world. In the columns of the periodical «Albanian School» in May 1939 I had translated and published a second article by Arbatsky The musical development of Albania, in order to introduce my compatriots to the thought of this foreign composer. I find it right on this occasion to reproduce his opinion on our popular music:

«Albanian popular music has such a life of its own, that if it were subjected to the western musical system, it would undoubtedly lose much and perhaps all the poetic value it possesses. The Albanian people have so far kept their archaic melodies. The most recent melodies are rather of oriental inspiration; both the former and the others are so original, that if they were adapted to the western system, they would completely lose their color. Albanian songs, either are completely without a predetermined pattern, resembling Gregorian chant, where the rhythm is given by the sung words, or have an original pattern, which, from the beginning, differs from the western one. You may have the impression that we are difficult to adapt this matter to the musical style of the West.

The most important thing is that in Albania the small people sing even more voices, sometimes improvising too, for this reason we can say that the Albanians have the necessary material for an independent creation of the original harmony and popular counterpoint. The Albanian popular music system must be studied over time, so that young composers can have the necessary material on which, with the inspiration of the Albanian people, they could work freely. Without popular music no people can create artistic musical culture without the basis of popular song itself. Through the study of popular music and its natural laws, Albanian composers will be able to create artistic musical culture, saving perhaps a lot of useless work to which composers from other nations had to undergo ».

This foreign observer had long predicted the advent of these popular songs, stating that Albanian folk song could not be preserved for long. Years later, and then the words "Albanian folk songs" will remain only a thing of the past. As of now, this phenomenon is observed at its beginning since we only hear these songs in the most distant countries. It is an absolute necessity, for the conservation of this part of folklore, also in the interest of international musical culture, to transcribe and preserve these notes ».

This article was originally published in AlbaniaNews the 15 September 2010

Other articles from the Distaptur Editorial Body

1943: Pirro di Plutarco in a series from the Distaptur publishing house

"Let me fall", the new single from Deborah Xhako