A document in the Albanian alphabet, 49 years before the Manastir Congress

This is a document written by 8 in May 1859, which survived in the church of Nikaj, in the Diocese of Shosh.

The document in the Albanian alphabet has escaped two catastrophes: the burning of the Nikaj church in the 1868 and the destruction of the 1967, when the communist dictatorship abolished religion.

According to the Albanian newspaper Shqiptarja.com, a document written in pure Albanian alphabet was discovered, 49 years before that was held The Congress of Manastir that, between the 14 and the 22 November 1908, officially decreed the birth of the alphabet which is also used in theAlbania today.

The Congress has always created the misunderstanding that, before it and for the 500 years of Ottoman domination, the Albanian was not written. In fact, not only was the Albanian language used in written form, but there is documented evidence that it was also translated, both in Italian and in other languages, decades before the Congress.

The Albanian basic alphabets used before the Congress and preserved mainly in foreign archives have had little change compared to the unified 20th century alphabet.

And the Albanian documents show that, despite some changes, the sound marking has remained almost the same. It is also known that the unification of the alphabets took place simultaneously with every language in the world, but no country denies that its language has been written and does not allow others to say it.

The latest document in Albanian, discovered by researcher and archivist Mark Palnikaj, shows that it has an alphabet similar to that of today. This allows him to support, against those who deny it, that there were schools and Albanian writing as for any other alphabet in the world.

The surviving document in Nikaj's church

Mark Palnikaj tells of a document written in two languages, Albanian and Italian, by a survivor of the church of Nikaj who was under the jurisdiction of the Diocese of Shosh (current Prefecture of Scutari, ed).

"This church had a rich library and this document survived two catastrophes that occurred," said Palnikaj, recalling "the burning of Nikaj's church in the 1868 and the destruction of the 1967 when the communist dictatorship started the war on religion . So Shosh was not a lost diocese and he wrote in Albanian in his parishes. Precisely this document of which I speak was written in Albanian in the 1859, 49 years before the Congress of Manastir ", says Palnikaj interviewed by Shqiptarja.com.

After finding this document, Palnikaj also confirmed the wealth that the church of Shosh had in the APF (Propaganda Fide Archive). This indicates that other documents written in the Albanian alphabet are found there.

According to Palnikaj in the "Fund SC Albania, Volume 5, page 178 both sides (front back) the inventory of the library in the church of Shoshi of 8 August 1864 is revealed, when Fra Dario Buciarelli delivers it to Fra Pal Berisha. This document shows that there are 50 book titles with 94 volumes. "

The document of the church of Nikaj, written 8 May 1859, as seen in the middle line and in the last one, contains the following Albanian entries:

Mark Palnikaj has also recently discovered an 1881 document in the Franciscan Archive, one written in a magazine entitled "Miscellaneous Memories". The document dates back to 27 years before the Congress.

Shortly before, Professor Ledi Shamku discovered an Albanian engraving on a plaque in Shen Premte Church.

"How much silence breaks a tombstone! Just kneel near it and listen. We are surrounded by our signs. We only need eyes to see and soul to listen ", he wrote Ledi Shamku. 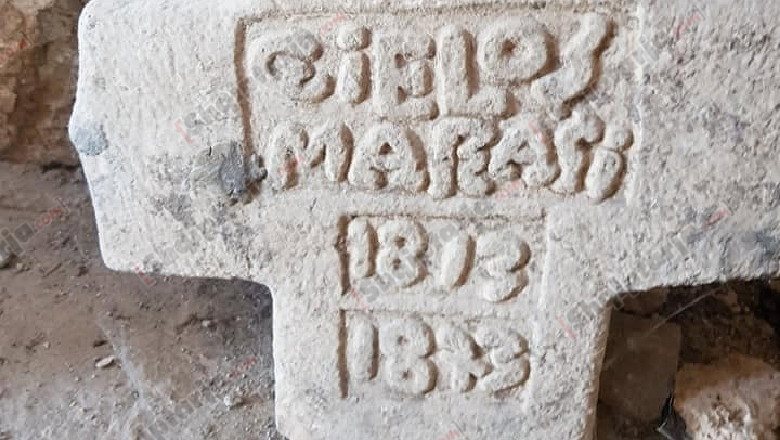 Northern Macedonia, Zaev: we will review the Albanian language law

Northern Macedonia, the inspectorate for language implementation is born

Arvareshu, an Illyrian language in Sardinia

The Albanian language deficiencies: it is also the fault of the school