Antonio Baldacci (Bologna, 1867-1950) was an Italian botanist and geographer, a lover of ethnographic, political and socio-economic studies. In the 1913 he publishes "Scutari d'Albania" in the magazine "Italia".

From the 1925 Baldacci dealt mainly with Albania, not only with the autonomous production of studies and publications but, starting from the 1928, also through scientific and political collaboration with some local institutions. From the 1931 to the 1939 he was honorary general consul of Albania in Bologna; from the 1942 he was a member of the Governing Council of the Albania Study Center at the Italian Academy; later he became a member of the Albanian Studies Institute of Tirana and cultural consultant of the General Lieutenancy in Albania, up to 1943.

About 250 publications remain about him, including articles published in magazines and works in volumes (among which the main works are mentioned: Albanian Itineraries, Rome, Italian Geographical Society, 1917; Albania, Rome, Institute for Eastern Europe, 1929 ; Scritti Adriatici I, Bologna, Compositori, 1943), the drafts of the unpublished work «Leonardo da Vinci and the world of plants», the very rich archive and the personal library, kept in the Municipal Library ofArchiginnasio di Bologna , one of the largest acquisitions of the library of the recent past.

Here you can consult the first part of the article

Scutari of Albania, by Antonio Baldacci 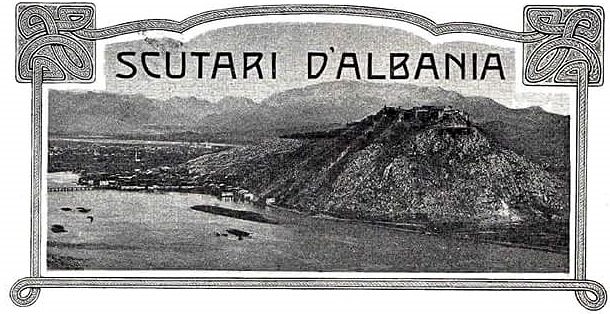 The population of Scutari is not well known.

Statistics in Turkey are always very approximate. Ten years ago I reported, based on official documents, 40 thousand inhabitants in round figures, in addition to 17 thousand people in the district (i).

According to other calculations the city of Scutari would have a population of 80 thousand inhabitants, of which 62 thousand Muslim Albanians, 16 thousand Albanian Catholics and 2 thousand of different nationalities (2).

The Barbarich (3), which had a lot of comparison material at its disposal, stands for the figures of 25.800 Muslims, 14 thousand Catholics and 4 thousand Orthodox. He also gives 12 mahalé Muslims and 2 Catholics, 4700 houses, 40 mosques, 12 churches, 1500 shops, which figures are, roughly, the same as mine ten years ago.

Fifty years ago, the Boué , the great scholar of the countries of Turkey in Europe, wrote of Scutari as one can write today (4). The courtyard of the houses has a door located mostly in the background, and in the walls there are often slits to pull in case of siege.

Every Albanian city, like the houses of every village, must always expect to be besieged and, therefore, they must be able to keep ready for defense. Once the doors were also made of iron; today they are mostly wood, heavy and very sturdy.

All the roads that flank the gardens of the eastern district are wide and at the ends have dams to prevent flooding of the Kiri. Scutari has the misfortune of floods. When the rain falls in torrents from the sky - what happens frequently in the basin of Lake Scutari from autumn to spring - the Kiri or lake, or both of them together, threaten to drown the city; circulation must then be done by boat. 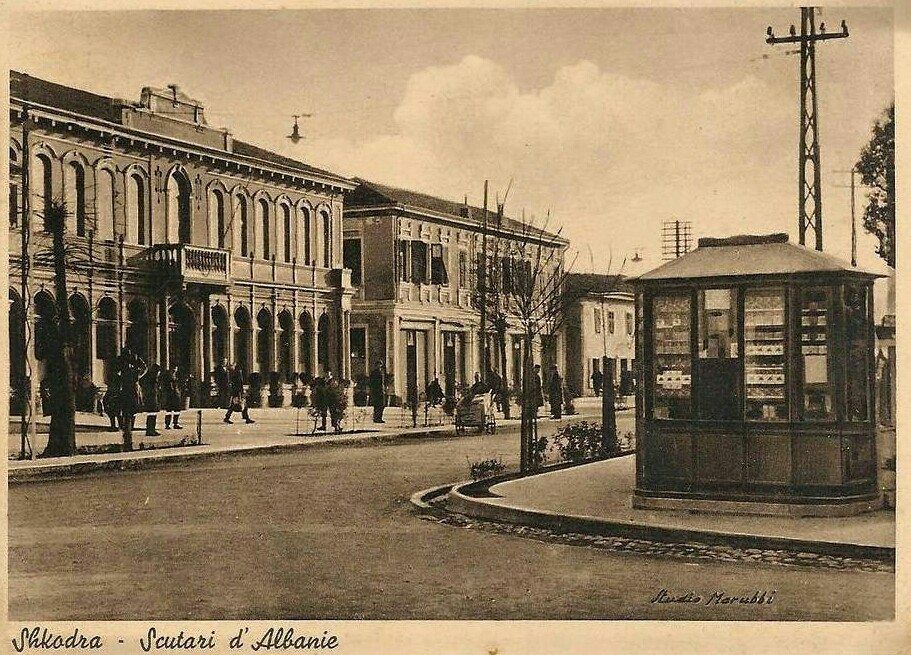 The gardens of Scutari are renowned. The land is excellent for the cultivation of fruit trees and grass; also the orange and lemon trees are good in the ground. A fruitful particularity is given by the pomegranate that in Scutari, as in Bar and elsewhere, produces extraordinarily large and sweet fruits. 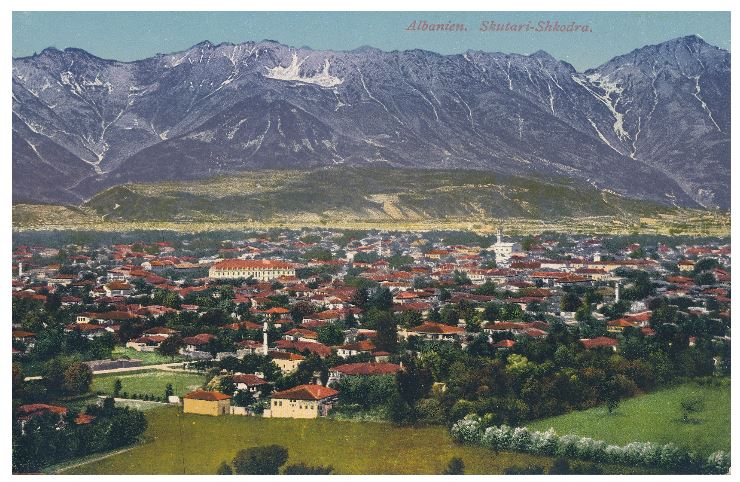 Muslim cities are characteristic for Turkish cemeteries: in Scutari there are about fifteen and each is protected by a mosque and large plane trees. This set of gardens and cemeteries with the tufts of trees here and there verdant between the white of the houses and the walls, gives Scutari the appearance of a large village, rather than a city, as we understand it in the Western meaning .

The eastern part of Shkodra is the healthiest because the proximity of the lake, the marshes of the Bojana and the fish market make the bazaar district quite easy to fever, and even water is better and purer and fresher than that of places towards the lake and the river.

Scutari was and is a node of great road importance especially for communications between the Adriatic and the interior of Turkey towards the upper Vardar valley and therefore towards Kosovo and Macedonia. In many projects for the Danubian-Adriatic railway, it is claimed to pass this first-order artery to Scutari, bringing it to San Giovanni di Medua, which would therefore become the line's head of the same railway, and build a branch for connection to Bar for satisfy the needs of Montenegro.

In Roman antiquity it seems that Scutari was united with Italy with the same communications that served Apollonia and Durazzo, which, starting from Apulia, kept the same route of today's communications of the Apulian society of Bari. 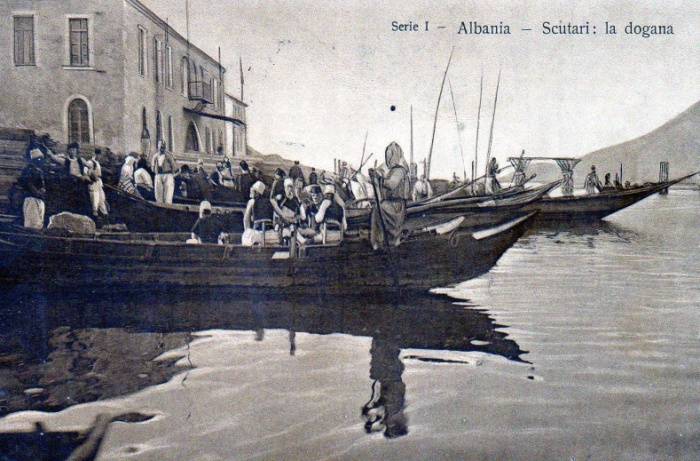 Secondary roads then departed from Scutari, of which even today the traces are found, for the upper valley of the Drin on one side and for the Moracia on the other: as is known, the main transverse artery was represented by the via Egnatia on which the road coming from the Labeatium, that is from Doclea and from Scutari, were going to be grafted.

In the Middle Ages, Illyrian communications were maintained and improved by the Serbs and later by the Venetians. Under the Turks they came to lose much, for the speed and for the goodness while remaining suitable for the carovaniero trade, that is to the commerce on back of animals: the Turks are not and they will never be suitable to make and to maintain comfortable roads.

The old Roman road from Scutari towards the north-west to the Zeta valley, rendered impractical at the time when Montenegro kept its borders closed to Turkey, is now an excellent thoroughfare served first by water with the Italo-Montenegrin boats of Lago di Scutari and later on the ground with the postal cars of Montenegro: this road, as it was in Rome, will soon continue - according to the Montenegrin road projects - for the Tara and for Herzegovina according to a direction and for Risano according to 'else.

A very frequented artery is the coastal one that from Scutari turns over Durres and then turns towards Macedonia, but even this road is only the continuation of the previous one because in Roman times, it came from Dalmatia and going around the Bocche di Cattaro rose from Risano in Montenegro, from where it descended to the lake of Scutari to go and join the Egnatia. 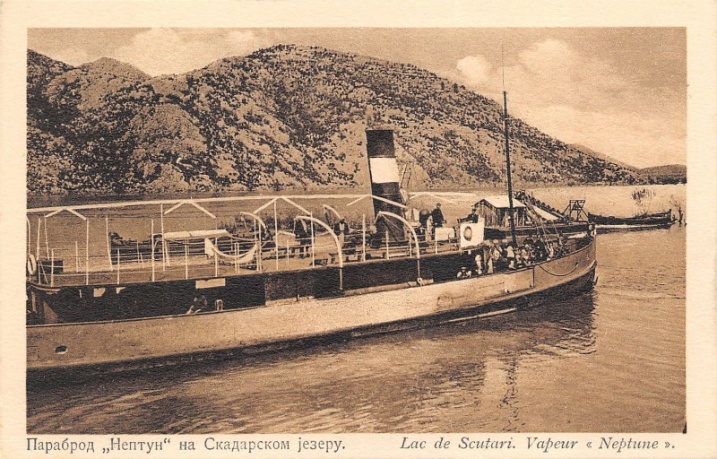 Today's maritime communications with Scutari are held by the Austro-Hungarian flag, from the Italian and Montenegrin ones. The Albanian coastal trade up to Lake Scutari can be said to be privileged in the hands of Austria for the excellent service that Lloyd does from Trieste to all the ports on the Dalmatian-Albanian coast.

No company, national or foreign, can compete with Lloyd because the Austrian government heavily subsidizes the shipping lines and rewards the producers with the main intention of increasingly assuring its trade, albeit with the sacrifice of its political action.

The Scutari airport is San Giovanni di Medua which has been riding for eight or ten hours on horseback according to the road and the season and about as much for the steamer going up the Bojana. The Austrian Lloyd touches Medua from and to Trieste twice a week and likewise does for the Levante and for the Bojana up to Obotti.

From Obotti to Scutari the transport is done with the boats of the lake (otters); service for the lake is done with trabaccoli or steamers and tugs built expressly by Lloyd for his representative. Italy arrives in Medua and then in Scutari with the steamers of Puglia, that is with the line B and with the Saint John of Medua-Scutari.

Until Medua, some steamers of Greek and Ottoman shipping companies may arrive from the Levant; from Kotor the Ungaro-Croatian steamers enter Bojano up to Obotti. By way of Bar, Scutari is served by Italian communications that from Bari arrive in Bar twice a week with the steamers of Puglia and continue with the Montenegrin diligence up to Virbazar on the lake: there they find the regular daily service of the Company's steamships for the ports of the lake.

Today in Scutari, the tradition in business, in the language of business, which is Italian, and also in the struggle for national aspirations, remains of our name. Our language is maintained there also in the confessional schools of other States. Scutari was united in Venice for trade; today it is with Trieste. This is always a nice union for Italianness.

We hope that if the Albanians succeed in making themselves independent, they will want to keep it!

Two words to explain the difference between the vaccine (which generally requires only one administration or periodic administrations, such as every XNUMX years (as with the hepatitis B vaccine) and the antiviral drug (such as the cocktail for HIV-positive patients, who ingest molecules through daily pills that attack parts of the virus, to directly destroy it). The vaccine consists of the administration of molecules that mimick parts of the virus without being infectious, so that our immune system can develop a memory to recognize those parts (that particular type of antigen) when the virus comes back on the doorstep...this memory in some cases lasts all the life, in other cases (like hepatitis B) a decade or so. Once this immune memory has been developed in our body, the pathogen will have to deal with an extremely powerful arsenal of anti-viral mechanisms (orchestrated by our immune cells) that will kill it in no time (in fact, after we get vaccinated, if we get the flu, we get rid of it without even realizing it...our (memory) immune cells know what to do at that point). Another way to develop this memory is by letting ourselves to be infected — as we've done with lots of infections, with low mortality and low morbidity. The antiviral drug is a molecule that acts against the pathogen too, but it does so on its own — the basic problem of an antiviral is that it doesn't last forever, because everything we eat (the pills) is excreted from our body, in a few hours or few days — but there are also molecules that can float, once you put them into the circle, for quite a few days ...(or techniques that modern pharmacology has been studying for a decade or so, aimed to transform molecules with the objective of extending their permanence in the tissues after being administered, see above: nanotechnology therapy). Bibliography

You can consult the first part of this article here . This article was also published in Albanian language with the translation from Gino Luka

Coronavirus Albania, in Shkoder negligence on measures. The government removes the prefect

Artodes - solidarity with the earthquake victims

At the Marubi Museum in Shkodër "Seven Albanian photographers, a residence"