On December 30, 1940 Gjergj Fishta, Franciscan friar, an active part of the literature and political history of the Land of the Eagles died.

Today 30 December in Albania is the day of the commemoration of Gjergj Fishta (23 October 1871 - 30 December 1940), a Franciscan friar active part of the literature and political history of the Country of Eagles.

The news of the death of the "Albanian national poet" was reported the following day (December 31, 1940) also in Italy by Corriere della Sera:

"News comes from Scutari that following a cardiac arrest his father Giorgio Fishta of the Order of the Friars Minor, academic of Italy and distinguished Albanian man of letters died this morning. Fishta, who was born in Shkoder in 1871, was the great Albanian national poet. He entered the Franciscan Order, completed ecclesiastical studies in Bosnia and returned to his homeland after receiving priestly orders.

[…] Having become one of the main exponents of the resurrected Albania, he attended the peace conference in Paris and was later appointed deputy and then vice-president of the Chamber. A sincere friend of Italy, in recognition of the merits towards his nation and for the value of his publications, he was called to be part of the Royal Academy of Italy last May.

Among the numerous publications of Father Fishta, poetic ones inspired in general by Albanian legends and tending above all to celebrate the national sentiment are important. In addition to a thirty-poem poem entitled Lahuta and Malcìs, he has written sacred hymns, various lyrics and political satires. ”- wrote Corriere della Sera. 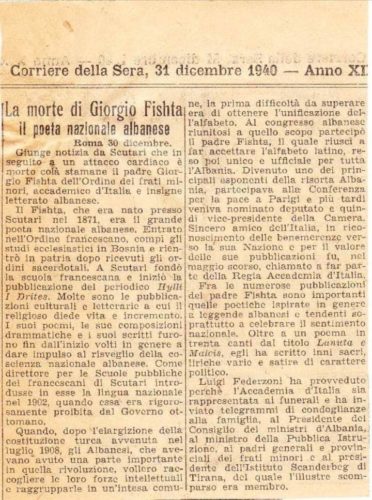 Represents Albania at the Congress of Manastir for the drafting of the Albanian alphabet. He actively participates in the independence movement of Albania (from 1910-1914) and represents it at the Conference of Ambassadors in London, as well as in the Paris Peace Congress 1919.

He was elected deputy to the parliament of independent Albania and in 1921 Vice-president of Parliament. As a representative of Albania he participates in the Interbalcanic Conferences of Athens (autumn 1930), Istanbul (October 1931) and Bucharest (1932).

Interest in literature and politics were not the only interests of Father Gjergj Fishta. He was also very interested in physics, mathematics, astronomy and other sciences. He read the publications of scientists like JA Segner and those of Albert Einstein.