17 November 1944: What is the historical truth about the liberation of Tirana?

Liberation of Tirana from the Germans the 17 November 1944: Truth or inconsistencies on the statements of the politburo of Enver Hoxha?

The welcome given to Vittorio Emanuele III, King of Albania for the 1939-1943 period, by the Tiranese population.

17 November 1944 - 17 November 2017
73th anniversary of the Liberation of Tirana by the Germans.
Event known as "the largest strategic planning operation and the biggest victory of the Albanian National Liberation Army partisans, with commander general Enver Hoxha and commander responsible for fighting in Tirana, his ex-right hand man, Mehmet Shehu"

A real gangrene for the Albanian historical, political and social fabric, even today, after one generation of the establishment of democracy in Albania and the change of political systems, continues to be the fact that Albanians have a blurred vision and of distorted knowledge about one's own history.

This is due to the fact that from 1944 to 1991 in Albania we lived under the most ferocious communist dictatorship ever, the one applied by Enver hoxha.

For this reason the history of the country could only be told and even documented and elaborated with a rich and sophisticated historiography based on a single ideological line, which was the one in force for about half a century of totalitarianism. 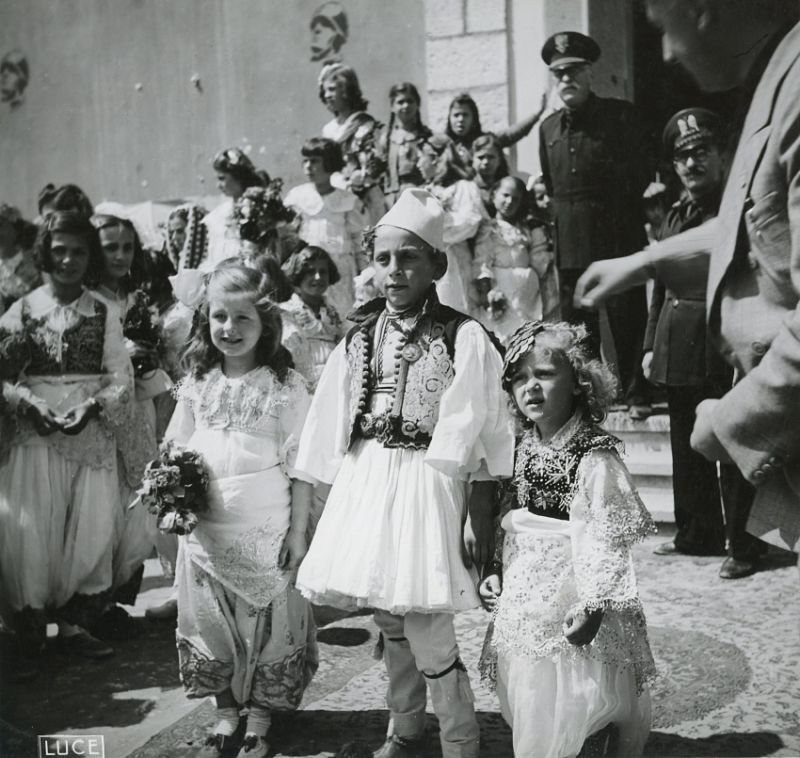 What was the real trend of the story concerning the liberation of Tirana the 17 Novembre 1944?

Tirana was proclaimed by the Lushnjë Congress of 1920, the provisional capital ofAlbania, instead from the Constituent Assembly in the 1925 it was definitively confirmed as capital.

About the certainty about the truth and the glory of the Albanian partisans and the hard defeat inflicted on the Nazis, in the so-called most important event of the Albanian National Liberation Anti-fascist Struggle, crowned with the liberation of Tirana, the November 17 1944, the questions that arise spontaneously are the following:

Was the victory complete or only partial? Is it incomplete, or even just an invention of communism? Is it necessary to re-examine all the distorted and arbitrary representation of the history of Albania by the dictatorship of Enver Hoxha established since the end of the war, immediately after the 1944?

Possible that at a distance of 26 years from the establishment of democracy in Albania - therefore from the 1991 - and from the change of political and social systems, the date of 17 November 1944, Liberation of Tirana, such an important event, does it still find public opinion today?

Is it perhaps to revisit the story of the Liberation of Tirana from the Albanian National Liberation Army and that of the role of general commander Enver Hoxha, of the strategist in the fighting carried out in his ex-right hand capital, Mehmet Shehu? The latter, one of the most experienced and trusted political and military exponents of the most ferocious communists of the Enver Hoxha politburo, established since the end of the war. Later, the former Prime Minister of Albania Shehu died on December 18 1981 in still mysterious circumstances: officially the cause of death was declared as suicide; later, Shehu was considered, by Enver Hoxha and his entourage, as an enemy of the nation and agent of foreign secret services.

This anniversary, the 17 November 1944, Liberation of Tirana, continues to have various interpretations and a thousand facets, remaining an enigma in the Albanian social, historical and political landscape.

First version, the official version of Albanian history to date

As anticipated in the introduction, especially when living under the rigid schemes of a totalitarian dictatorship, there is an entire historiography, rich in works written during totalitarianism, an Albanian national historical bibliography, in defense of the communist theory of the victory of the Army of Albanian National Liberation with the commander in chief, Comrade Enver Hoxha, the day of the 17 November 1944 against the Germans, occupiers of Tirana. 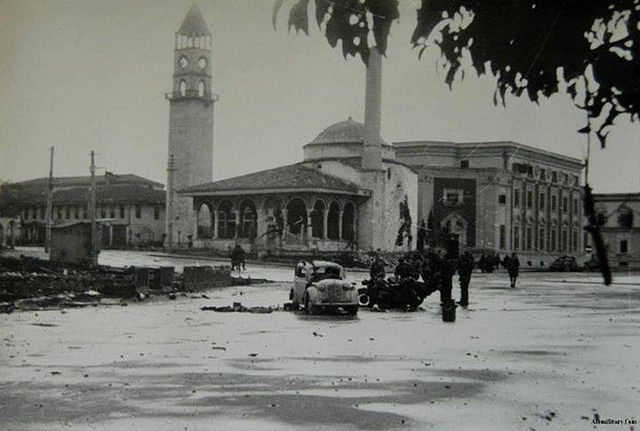 I am not here to singly list all the works of the bibliography on Albanian history for reasons of space and, of course, also because this paper does not intend to be a historical "discovery" in itself. It is only a reflection, so those interested can deepen, at any time, by tracing the documentation and eventually, share objectives and actions in the appropriate locations comparison.

Of the line that follows the thread of this first part - the only one for half a century - and official as a version, the relationship that appears is broadly the following:

[...] "On the morning of 17 November 1944, after 19 days and nights of hard and incessant fighting, the capital of Albania, Tirana, was liberated.

Following the attacks by Albanian partisans coming from every direction and having suffered very serious human and material losses, the Germans begin their retreat. Taking advantage of the darkness of the night and due to bad weather conditions, the troops of the German army manage to break the siege, heading towards the airfield and from there, continue towards the Vor roadë - Scutari.
On the morning of November 17 the people of Tirana went out into the streets of the city to greet the winners who in 19 days liberated the capital from the Germans. "

Report of the British major JPF Oliver, present in Tirana since September 1944 appointed as a mediator for the allies in the First Division of the Albanian National Liberation Army.

Peter Lucas is engaged in research and studies on Albanian historiography. He elaborated various information on the subject and also published a book on the history of Albania, focusing mainly on the role of American secret services during the Second World War in Albania, entitled: "The American mission in Albania - The secret operations of OSS and the collaboration with the partisan communists during the Second World War ". The book was published in both languages, English and Albanian.

For the realization of this book, the author consulted the documentation regarding the item "Albania and American Secret Services during the Second World War" in the national archive of the American State, open to the public.

Various Albanian newspapers frequently disseminate fragments of material published by him about this subject.

In summary, in his report addressed to his superiors, the British major Oliver, who secretly and without the knowledge of the Albanian communists had managed to sneak into Tirana, in a war landscape for liberation, reports the report of the situation reported to him by the leader Mehmet Shehu who was in charge of the fighting.

Everything was different from what the major himself was seeing in real time.

He reports that first of all the number of Germans present in Tirana was not more than three hundred, contrary to the "three thousand" Germans as Mehmet Shehu claimed, since the Germans had already begun the retreat previously. On the part of the Albanians, there was no need to try too hard to defeat the Germans, for the simple reason that there was no real German resistance. The amount of German weapons and war materials present in Tirana in those moments was much lower than the figures reported by the Albanian communists and that, consequently, even the numerical losses of soldiers and materials, in the balance of the Albanian communists, were totally incongruent, etc.

At the same time, many other foreign documents on the liberation of Tirana have been discovered.

German documentation which in turn, in part confirm the British relations, partly contest them.

It would be important to combine the materials and, in a scientific way, compare them, with the aim of mending the fragmentary pieces of history.

The version of the Albanian totalitarian regime for about half a century, on the liberation of Tirana, is no longer the only source and the undisputed version, so far considered true.

Here it is not questioned whether it is a reliable thesis or not, but it can preclude it a broader and more objective one recognition of the facts historical.

Another thing is undisputed: unconditional respect for those killed in war. These are Albanian partisans, young boys who are not necessarily Communists, who believed in a sacred ideal, the freedom of their homeland and for which, they gave the most precious thing, their life. The same consideration, on a human level, extends to all soldiers who fell in the war, even those of enemy ranks.

Confidential treatment goes to prisoners of war. There have been reports that Albanian communists have broken international war laws and agreements, killing their prisoners.

The prefect of Tirana, Qazim Mulleti , having seen the air that was blowing, he had left Tirana already in September 1944 and was headed towards Germany. Not having had time to bring his wife and son with them, they were captured by the Albanian communists and interned in the fierce Albanian internment camps, where later the prefect's wife died. All their assets have been seized. 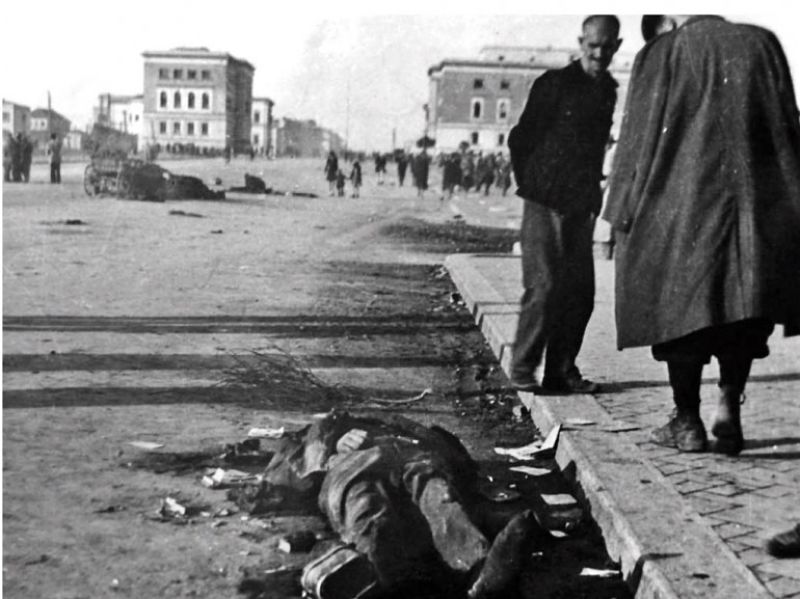 On the eve of the 17 Novembre 1944, the Albanian army for the anti-fascist struggle proclaimed the absolute victory over the Nazi-Fascists. That day would have been great celebrations for the defeat of the enemy by the Albanian partisans. Just those days, in the capital, in the alleys of Tirana, in the narrow streets, in the houses, barbarian intellectuals, autochthonous and not, people who had graduated abroad, of wide culture and that the future communist government feared as dissidents. They were killed for the simple reason of being intellectual and because they could disagree with the beliefs and the line of Enver Hoxha.

It was just a prelude to the Albanian catastrophe, to the dictatorship that would soon have wrapped Albania in an iron fist for half a century.

The assets, houses and cultural heritage of many Albanian citizens were seized.

For this reason, of the 17 Novembre, many elderly Tiranesi have always had a bitter and painful memory and do not remember it as a day of celebration, but on the contrary, as the day when they began their ordeal with the establishment of the government of Enver Hoxha.

It is up to the Albanian and international experts to do everything possible to allow the Albanians to regain possession of their history.

It is not a pretense or a whim, it is not a challenge that intends to highlight a winner or a loser and it is not that one of the theses should necessarily exclude the other, or suffocate new versions of writings and historical documents. By attributing due importance to every detail and without oscillating between ignorance and error, one can arrive at the truth.

It is the pure truth about the development of the history of Albania, of which, undoubtedly, the diatribe about 17 Novembre, 1944, associated with the Liberation of Tirana, which today should also invite Albanian politicians to put aside any belief, is also part of political idea and interest, to know how to distinguish history from politics and find them all agreed that the time wasted by the Albanians to accept only one reality has already passed and, certainly, has not brought any progress.

* Recently discovered materials and documents have been published in various Albanian portals. The themes that have been treated by foreign scholars, or by Albanians of foreign citizenship, by personalities, war veterans and Albanian intellectuals, open new perspectives for new comparisons: the discovery of the truth about this piece of history of the Albanian capital, an integral part of the Albanian national history.