Scanderbeg's weapons: not only in Vienna, but also in Venice

The centuries-old ties between the Serenissima and Albania. An unpublished new story, by Lucia Nadin.

The statue of Scanderbeg on the Bucintoro in Venice, a 17th century print.

Who does not have present the helmet of Giorgio Castriota Scanderbeg, preserved together with a sword, in the Vienna Kunsthistorisches Museum and reproduced in a thousand forms in the iconographic panorama related to the Albanian Hero?

Who does not remember brought it to the display case in the National Historical Museum of Tirana simultaneously with the exhibition of Meshari of Buzuku equally under display case in the National Library of Tirana, in the now distant 2012? Even the writer remembers the long, long silent line of visitors who were allowed to admire, with astonishment and veneration, the mythical weapons brought from Vienna to Tirana. Unique memorabilia of the Albanian hero, to him (however) attributed.

But history, as we know, can reserve unexpected surprises, it can keep a gift of knowledge for those who love to go through the archives. In this case by subtracting - with benevolence it is obvious - the uniqueness of a primacy in a city, Vienna, is used to assign it to (or at least share it with) another, Venice.

So, that's how things went.

Venice: a Library, already known to the Albanians for having preserved the very precious text of the Statutes of Scutari, to browse through a manuscript with papers of the XVIII century, normal work for the research scholar. Here, however, that among those papers appears a list of weapons and armor of famous people linked to the history of the Most Serene Republic that had been preserved in the Arsenal of Venice over the centuries. And a name is included in that list relating to Famous Men, Morosini, Duodo, Mocenigo, Barbarigo, Bragadin and many others, whose armor, accompanied by various weapons, was present in the Arsenale: the name of Giorgio Castriota Scanderbeg.

Armor of Scanderbeg, that is, of Giorgio Castriotto, Prince of Albania, who made war with the Ottoman for 40 continuous years and its victorious sword exists above the Halls of the Most Excessive Council of X. Standing

To read that name was really a jolt: but how, we are in the 2018, just the commemorative year of Scanderbeg, and do we know of a presence of his weapons still exhibited in the XVIII century in the Arsenal of Venice? An unexpected gift! And where did they end today? You will see it by reading these lines.

The Arsenal, it must be remembered, was the "commercial heart" of the Republic, there were created boats, there were forged weapons of all kinds, from there came the fleet: a true city in the city, symbol of the Venetian maritime power, already described as an exceptional place by Dante Alighieri.

During the sixteenth and seventeenth centuries in it some large rooms had been used as places of exhibition of the most valuable pieces that the workers had produced and were producing, often in the aftermath of great battles supported by brave condottieri. Those rooms had become real museums, to which famous people were brought as well as cultured passing travelers.

So Lassels in the Arsenal of Venice had seen, among others, the sword and weapons of Scanderbeg, and the guide who directed his path had dwelt on talking to him about a blacksmith who had become famous precisely because he had been the "personal" blacksmith of Scanderbeg.

You always have to tare the words of tourist guides ... yesterday as today! But what counts is the fame of the character, what counts is the legend linked to him and his extraordinary war that lasted in Venice two centuries after his death; the Venetian pride implicit in that story seemed almost to want to claim Castriota's successes even to his Venetian blacksmith's ability to create weapons for him!

In the list mentioned above, in addition to the indication of the Scanderbeg armor present then in the "Museum" of the Arsenal, another important notation appears: the (original?) Sword of Scanderbeg was jealously guarded in the Palazzo Ducale, in Piazza San Marco, in a room of the Council of Ten used as a review of precious weapons. In fact, some rooms of the Council of Ten kept both weapons in defense and weapons exhibited as museum pieces.

A search in other manuscripts of the same Correr Library was enough to find confirmation: Giovanni Grevembroch, who in the XVIII century told the history of Venice through beautiful watercolors depicting people and things, drew his own sword "decanted for that of Scanderbeg"Preserved in Palazzo Ducale, by himself in person seen and copied.

All this still in the eighteenth century, when the Serenissima Republic of Venice was alive and vital: of Scanderbeg there were in the Arsenal armor, of parade it is obvious, and various weapons; the sword considered authentic (one of the many swords however attributed to Castriota!) was in Palazzo Ducale.

And today? From a first search no trace emerged. But to answer we must rethink what happened after that fateful 1797 in which the millennial history of the Serenissima was closed.

From the Arsenale, as a safeguard, much material was then brought to the Palazzo Ducale, including weapons and armor, while the French forces began to plunder the city's art collections.

Even a shipment of weapons and war objects left by sea in the direction of France, but was wrecked - wrote the chronicle - near Corfu. The mythical Bucintoro was burned in the body of water of the San Marco Basin to recover its gold dust. On the Bucintoro of the previous century, remember, he had towered the statue commonly known as the "Giant", that is, by Giorgio Castriota Scanderbeg, all covered with silver plates.

Peace builds bridges, war destroys them. This unfortunately at any time, in any latitude.

The Austrians and other art collections took over from the French, other relics migrated, this time from Venice not to Paris but to Vienna; at the end of the nineteenth century Federico Berchet, in contact with the director of the Vienna Museum Boeheim, confirmed the existence of some armor transferred there: among others, that of Sebastiano Venier, Bartolomeo Colleoni, Melchiorre Michiel, Agostino Barbarigo.

And that of Scanderbeg? From Venice where did it go, together with "his" sword?

Today in the Ducal Palace in Venice there are very few remains of ancient undated armor on which work is being carried out for the precise identification and dating. In the Correr Museum there are numerous "license plates" of the Stradioti and many weapons not all cataloged.

Research has just begun and finding it is an open challenge.

But in the meantime having learned of his existence and the respect with which he had also embellished the Pantheon of the Arsenal of Venice is a page, unpublished until recently, that honors the history of Albania and its Illustrious Scanderbeg. 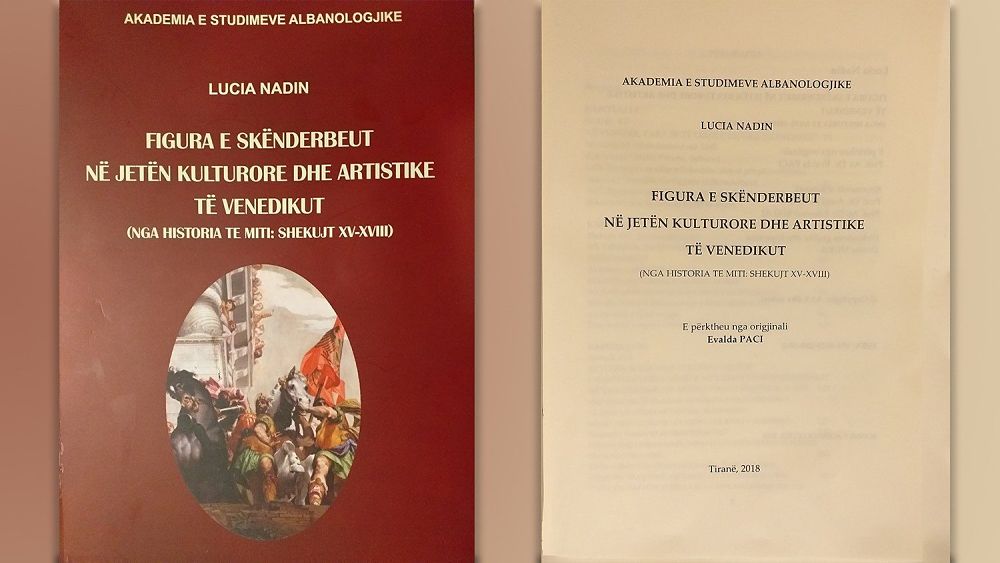 Authors among the desks: Darien Levani and Elvis Malaj talk about Albania