The biography of Father Giuseppe Valentini SJ was published in volume 97 of the Biographical Dictionary of Italians published by the Italian Encyclopedia Institute.

The Biographical Dictionary of Italians is an editorial initiative created by Giovanni Gentile in 1925 on the model of similar collections published in Germany and England.

The work aimed to collect the biographical voices of Italians worthy of being remembered as they ascended to the honors of history and lived in a very long time interval: from the fall of the Western Roman Empire to the present day.

The first volume appeared in 1960, on the eve of the centenary of the Unification of Italy. It had taken about fifteen years to organize a huge catalog of historical figures, from which 40 Italians were extracted. Up to 000 2020 volumes have been published, up to the letter V.

A large and learned biography written by the scholar has just been published in volume 97 Ardian Ndreca professor of history of modern philosophy and director of the Pontifical Urbaniana University of Rome.

The author retraces in detail the life and scientific work of Father Valentini emphasizing the importance of his numerous contributions to the history of Albania.

Only the careful reading of the entry published in the Biographical Dictionary will make it possible to understand the vastness of Father Valentini's Albanian studies.

We remember in this circumstance a little-known episode.

Father Valentini he resided in Albania in the early XNUMXs. In that period the DISTAPTUR publishing house of Tirana had planned to publish a book Father Giuseppe Valentini which collected his articles published in 1941 and 1942 on the Albanian tourism magazine Drini.

The book entitled "Historical walks in Upper Albania" it would have been published, like the previous editions of the same publishing house, in Italian and Albanian. 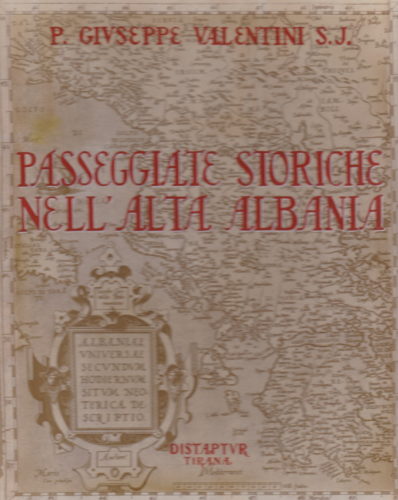 The volume was to be accompanied by numerous illustrations of the places described in the text and of the most important monuments. Some of the photographs are of the famous Marubi photo studio, while most are the work of professional photographers and the same author.

Unfortunately, the well-known events of 1942 - 1943 suspended the initiative, but fortunately the texts of the articles and the originals of the photographs were saved in a private archive.

Albania News published - in 2012 - the transcription of DRINI's articles which would have constituted as many chapters of the book and numerous illustrations.

Father Giuseppe Valentini SJ - From Tirana to Matja (part 2a)

Father Giuseppe Valentini SJ - From Tirana to the Matja

Finally, we wish to express the most vivid admiration for the work of Professor Ndreca which constitutes a fundamental stage for the knowledge and memory of Father Giuseppe Valentini.

The magazine "Drini" - History of an initiative of the 40 years