"InfoAlbania. The Albanian media from the 20th century to the present", presentation in national preview at Tempo di Libri

In 2012 I graduated in Journalism at the Catholic University of the Sacred Heart of Brescia.

I didn't know what I wanted to do in life (I don't know that well even today), but I loved writing and writing has always been an important part of my life for me!

I write when I am happy, when I am sad, when I feel particularly in love or on the contrary if something makes me angry.

Today I write about everything a little: fashion, beauty, children. I work for a women's magazine and I deal with many things, all equally interesting.

But let's go back to my degree, which I remember very well. They were already 3 and a half years that I attended Albania and that this country, its history, its people, had attracted my attention.

I used to go there often, almost every month. The time had come when I had to decide which subject to dedicate to me for my thesis, I thought that Albania could have been a good starting point. And so, consulting with some of my teachers, I decided that I would write a thesis on the birth and evolution of Albanian telegiornalism, of which I knew practically nothing!

A beautiful adventure, an experimental thesis, and starting to look for material I immediately realized that there was practically very little! My rapporteur, the teacher of Mass Communication Theory and Technique, was very well prepared, but not on the Albanian newscast or television!

I put my husband at work (who was then engaged, I hadn't married yet) and his acquaintances, I started using social media, Facebook to be precise, to find Albanian writers or journalists that I hoped they could help me.

A glimmer of hope came when Ylli Polovina, writer and previously editor of the newspaper of Berat, his hometown, he replied to me on Messenger! I was delighted and after a few messages, we set up a meeting in Tirana.

Ylli is a wonderful person, a professional, a lover of his work, a true master, with an incredible sense of humility! He gave me the paper copy of his book, perhaps the most precious text ever for my work, "Rai & Albania. A great presence in the history of a people ", published in 2002 by RAI-ERI.

The text analyzes the relationship between Rai and the birth of Albanian television, during the dictatorship of Enver Hoxha. Italian television was seen by the schipetarian people as a window on the world, a form of freedom and transgression.

Later, another stroke of luck presented itself, thanks to my husband who, through a relative, a second cousin, introduced me to Tefta Radi and Kiço Fotiadhi: the first Albanian newscasts. It was an incredible encounter, in a bar in the center of Tirana, with a friend, a journalist, who acted as my interpreter.

They both presented themselves with old photographs taken at the beginning of their career. I listened to them enchanted, even though I didn't understand a word (today I am definitely improved) of Albanian!

And so my thesis took shape, as I found material: articles, fragments of books on journalism, helped by an assistant of my rapporteur who was involved in Balkan journalism ... I graduated with top marks and praise, and a satisfaction great, aware of the research I had done, but also of the wonderful meetings I had held.

Six years later my thesis has turned into a book, the second one I dedicate to Albania. Infoalbania, published by Besa Editrice, was born right here. The title of the thesis was different; "Lajmet Shqiptare, history, form and content of Albanian telegiornalism."

The book obviously has a less academic tone, changes have been made, I have included a part dedicated to the Agon Channel phenomenon, it deals in more depth with the theme of the Albanian state media, starting from the newscast, but also embracing other realities such as social media , today increasingly influential. Who is it for?

To all I would say, it is easy to use, deals with very current issues, analyzed starting from a historical point of view. The Albanians should read it if they are not aware of the history of their television and the Italians who work in the media, information and communication sectors, professionals, journalists, students, everyone!

I could not foresee victory di Ermal Meta e Fabrizio Moro a Sanremo this year, but in the book there is a part dedicated to Italian Song Festival and how important this was for the young Albanians, although his listening and disclosure was absolutely forbidden by the regime.

In the meantime I continue to write, to go to Albania of course, I became a journalist in all respects, I help a very dear friend in the publication of her romance novels, I dream of always having a greater number of readers and above all I am engaged in the most beautiful job of world: mom! It's to my baby, Elia Fierza, which I dedicate this book and all those to come!

Elena Pagani, born in 1987, has a degree in Human Rights and Ethics of International Cooperation. He dedicated his debut book to the history of Albania, Where the bunkers become ladybugs (2015), published by Besa publisher 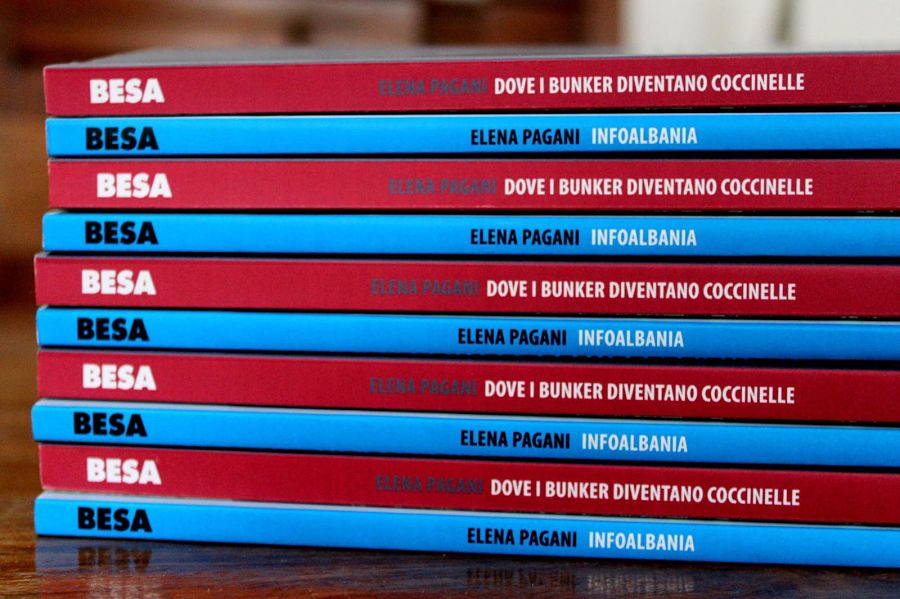