di Adela Kolea
in Art, Tidbits of an Italian-Albanian, Dossier
0

While in reality the young Protopapa, ex-exponent of the "Balli Kombëtar ”- Albanian“ National Front ”had graduated in nuclear physics in the United States, where he had exiled in the 1944, in the film made under dictatorship in Albania, in the 1970, he was instead described as a gruff and greedy man at the head of a militia of the nationalist movement “Balli Kombëtar ”- Albanian“ National Front ”operating during the war in south-east Albania.

You Albanians, of the generation that corresponds to the years '70 -' 80, you remember Sali Protopapa, the bizarre character of the author Dritëro Agolli, exponent of the "Balli Kombëtar" (National Front), of the film "I teti në bronz" (The eighth bronze), ridiculed by the Albanian cinematography of socialist realism released in theaters in the 1970? 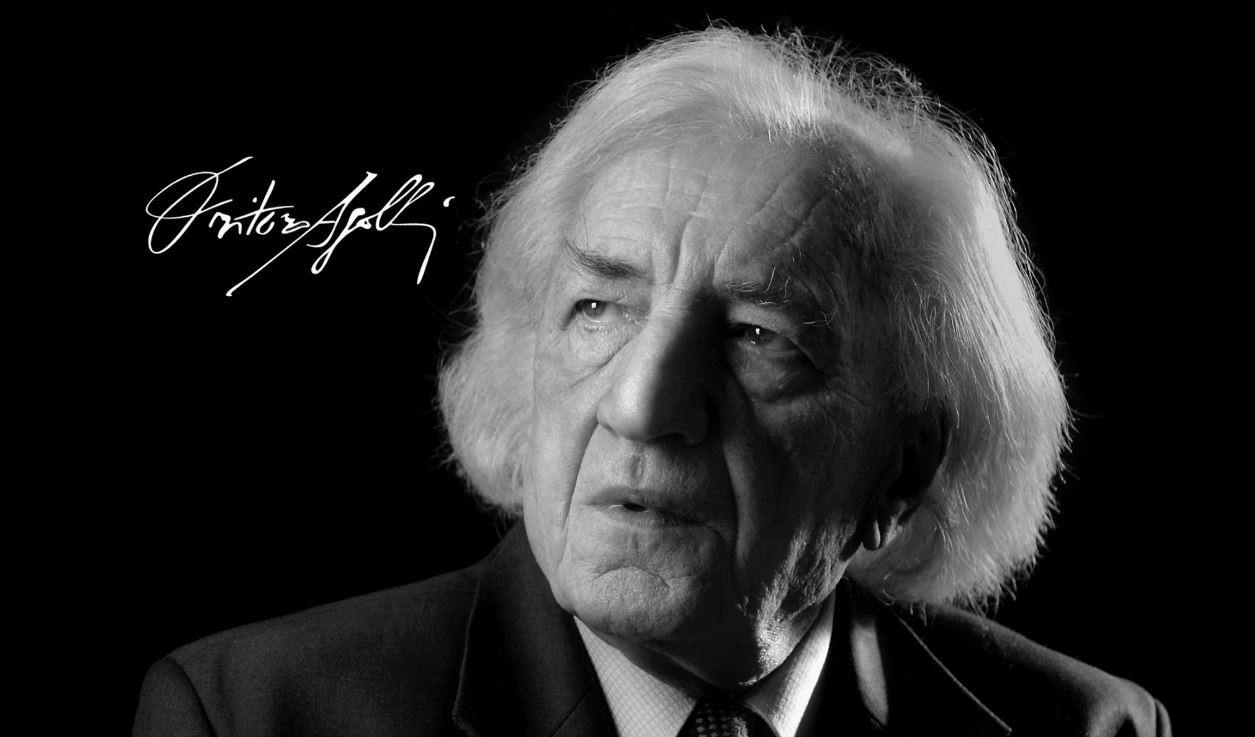 Who was Sali Protopapa, the character in the Albanian socialist realism film?

In a role brilliantly played by the well-known Albanian actor Pirro Mani, Sali Protopapa in the film was an exponent of the "Balli Kombëtar" (National Front), the latter, a nationalist movement created in Albania during the Second World War, in strong contrast with the partisans and the communists, led by commander Enver Hoxha.

The film's screenplay was made based on the novel "Komisari Memo" (Commissioner Memo) by the illustrious Albanian writer, Dritëro Agolli, written in 1969, with an evident content influenced by the defamatory cliché of the communist ideology in power against its enemies .

In the film, Sali Protopapa, head of a militia of fighters of the "Balli Kombëtar", which operated in an area of ​​south-eastern Albania, looks like a rough, mustachioed man who ordered his militiamen to go and steal chickens in the villages , to sack the houses of the poor peasants and indeed, to order the latter with the use of force and weapons, to serve them by eating lamb and drinking meat, raki, getting drunk all the time.
And in comparison with the fighting actions against the Albanian partisans, its militias always prove defeated.

Who was the real Sejfi Protopapa instead?

But the serious ergo problem is that Sali Protopapa really existed!

I mean, his name was actually Sejfi Protopapa. It was therefore slightly modified by the author Dritëro Agolli the name of the character, leaving his original surname intact. He was actually an exponent of the Nationalist movement "Balli Kombëtar" - "National Front" in Albania during the Second World War.

He was born the 20 February 1923 in Berat, Albania. Heir of a family of well-to-do bey gentlemen of origin of the Protopapë village of Korça (Coriza). His father was a lawyer. He left Berat in the 1944 and settled first in Italy and then in the United States. In the United States he graduated in nuclear physics. He worked in NASA.

Initially Sejfi Protopapa, at the time a twenty-year-old boy, and the national movement to which he belonged, had signed a pact of agreement between them and the partisans of Enver Hoxha to collaborate, in August 1943, known in Albanian history with the name of the Conference of Mukje- Konferenca and Mukjes.
This initiative of collaboration between the communists of Enver Hoxha and the nationalists of "Balli Kombëtar" came following the need for the establishment of a common committee for national salvation, in a delicate moment for Albania, which in the 1943 corresponded with the capitulation of Italy and the German occupation.

Shortly afterwards, the National Front learns that Enver Hoxha and his Communist party no longer recognize "The Mukje Agreement" - "Marrëveshja and Mukjes" for which, the communists declare open struggle to the nationalists of the "Balli Kombëtar" .

As it happens, Sejfi Protopapa, who worked as a press officer for his movement - their organization was initially a simple movement of independent young people and they also had their own newspaper "Flamuri", "The flag" - in which, he was exactly a cyclostyle expert, with whom they divulged copies of their political materials, he was therefore the first to hold a document signed by "Shpati", this was the nickname of Enver Hoxha during the war, which put black on white the fact that the Albanian communist party led by E.Hoxha, no longer recognizing the aforementioned Mukje agreement, declared open war to the nationalists of "Balli Kombëtar".

This was the spark that drove the young Sejfi Protopapa to join with more motivation and to be present even more actively in the Balli Kombëtar movement, obtaining the role of the leader of a militia that operated between Berat and Fier, and then - aware of the danger that ran with the rise of communism - in the 1944, leaving Albania, heading towards Italy and later settling in as a political emigrant in the United States.

So he lived all his life in Wayland, Massachusetts, in the United States, from the 1944 and in the 1991 with the arrival of democracy in Albania, he returned there after many years of 47.

Comparison between Sejfi Protopapa and the author Dritëro Agolli, in the 1991 at the latter's home in Tirana

The Drit face to faceëro Agolli, known Albanian writer and "Sali Protopapa", the ridiculous character of the film created ad hoc by him in dictatorship, to denigrate the antagonists of the regime, including the exponents of the nationalist movement "Dance Kombëtar ”-“ National Front ”.

In a newly established democracy, as soon as he arrived in Albania in the 1991 from the United States, Sejfi Protopapa learns, to his great astonishment, that during all the years of the dictatorship in Albania, a film was broadcast, in which there was a character who denigrated his figure, from when he had been an exponent of the Balli Kombëtar before going into exile and who, because of this author, who did not change even the surname of the person who reported several other people in his film, of his parental network remaining in Albania, who carried the same surname they suffered, were persecuted and others were forced to change their surname to save themselves from the communist fury.

The real Sejfi Protopapa, indignant, direct and without words, knocks on the door of the author Dritëro Agollli, introducing himself:

"I am the real Sejfi Protopapa, the one who inspired you for the figure of your character Sali Protopapa, slandering me for years and years and causing serious consequences to so many people dear to me! How did you let yourself do this? "

It seems that Dritëro Agolli offered him hospitality, that he served him and that they drank raki together - a bit like the character who embodied him in the film, he also drank - but, it does not appear that there were any actual excuses from part of the author towards this person.

All this, justifying with the time that ran and the standard phrases that "in art everything is allowed, that the character of the film was fictitious and that the reference to him was to be considered purely casual. "

But the real Sejfi Protopapa has never forgiven the author Dritëro Agolli this choice of abusing his name and denigrating his figure as a purely cinematographic function, with dramatic consequences extended to his kinship left in Albania after his exile, associated to persecution by the totalitarian communist regime.

Proposal for "reverse censorship" in Albania today, in a democracy

The appeal by the director of the Institute of Crime Studies of Communism to censor the films of the Communist period, made and projected in Albania before the 90 years.

In an initiative that took institutional form, involving a large number of experts in Albanian film art, actors, directors and screenwriters, media representatives, writers and politicians are asked to ban Albanian socialist realism films, considered defamatory for good part of the population of Albania.

Recently, in Albania, enormous public opinion has taken on the spread of the appeal by the head of the Communist Crimes Institute to no longer permit the publication of all Albanian cinematographic works made during totalitarianism, in how much they offend public sensibility by raising the cult of the spy to the detriment of the people and the informant at the service of the state, the denigration of the so-called reactionary figures or of all the dissidents of the regime, the clergy etc ...

There is a part of the people - including the initiator of the appeal itself - which claims if not to totally censor the films, to cut off pieces of it, to determine at least a specific time slot for their transmission - for the damage that could cause on the education of minors, of the new generations, for the wrong messages that they could receive given their contents from the strong ideological hammering - and the addition of subtitles or explanations on the context in which the films had been made, their real goal or message they intended to convey, following the patterns of communist censorship.

All with the aim of avoiding the influence of the people from nostalgia for the old totalitarian system, so as to avoid the spread of the epidemic "nostalgic of the system" and not only: not to rage further with the spread of these projections that have to center of their plots the denigration of the enemies of the communist system of the dictatorship period in Albania, do not turn a knife on the sore, touching the suffering that people marginalized and persecuted by the system had already suffered on their own skin and that of their family members in their real life and no longer to artistic fiction.

And there is the other part of the people who firmly believe that, apart from human intent, this initiative goes against the art itself.

Art cannot be explained! With partially censored films, cutting out pieces or adding explanations, the whole category of artists would be offended in this way. The things treated in those films are all understood, there is no need for explanations ... The reasons for the construction of those specific indoctrinated stereotypes are well known by the Albanians.

Artistic creativity, despite being those carried out under censorship in dictatorship, bears the mark of the time that ran and there is an awareness of this by everyone. Of course, one cannot deny the commitment, the talent in acting, the dedication of a whole generation of artists in Albania, of thickness and that the whole world would envy us.

In an Albania in which the previous totalitarian regime had as a powerful weapon centered in its hands, the destruction and elimination of everything that went against its line, since various sources of Albanian artistic, religious and cultural heritage have been destroyed, not today we can demonstrate in democracy, using the same mechanism of destruction for artistic works realized in the darkest period of the life of the Albanian people, totalitarianism.

The new generations indeed, need to know the past of Albania, the life context of their loved ones and the television documentation, the artistic and cinematographic heritage are an invaluable source of information.

Art, with its universal effect, would act as the opposite, as a tool for not forgetting and would not incite nostalgia for that system from which the Albanians would no longer be afraid.

The Albanians should instead face its consequences face to face, with the knowledge that history knows itself more deeply if it is faced, not avoiding it, even fearing to "poison itself" by watching an indoctrinated film of the past ...