Albania: Land of the sons of the Eagle. The Conquer'

The War Illustrated (Illustrated War) was one British war magazine published in London by William Berry (owner of the Daily Telegraph). The 22 August 1914 publication began, eighteen days after the United Kingdom declared war on Germany.

In the course of Second World War 255 numbers have been published before the magazine definitively ceased production theApril 11 1947.

The 2 December of the 1940 Magazine dedicates a special issue to Albania entitled "How Italians were thrust out of South Albania". Today we publish the second part translated from Gino Luka . The first part was published on October 1, 2017 by Title "Albania: Land of the sons of the Eagle" .

Villages are generally isolated and often the only man capable of reading or writing is the priest. The villages are connected by paths that rarely deserve the name of roads. There are no railways in Albania, and the only automotive route is the one that goes by Durres in Elbasan and that the Italians have extended up to Koritza and perhaps the Turkish military highway that continues from Forty saints in Gjirokaster and then across the border to Janina in Greece.

On the coast and in the valleys where the hills widen to form small basins there are a series of small towns. The capital is Tirana, well aligned in an arm of the coastal plain and thus relatively immune to attack from the sea.

At the center of a Muslim district, and with its rather dilapidated buildings, it brings to mind suggestive scenes from Eastern Europe. Its population has been estimated at thirty thousand, but sometimes it is claimed that two other cities are more populous: Shkodër in the north east (almost in Yugoslavia) e Koritza, considered the most beautiful city in the country and occupied by the Greeks the 22 November 1940.

The main ports are Vlora (10.000) and Durres (9.000), both have been severely hammered by RAF aircraft since the start of the war. Two other places whose names are often quoted are currently Elbasan (14.000) and Argyrokastro, or Gjinokaster how the Albanians call it (11.000).

One of the most backward countries in Europe, Albania is believed to have considerable mineral wealth. There are salt pans in Vlora, and even bitumen and asphalt are extracted nearby. Coal and iron have been found and there is a small oil field in the Devolli valley; the concession is owned by an Italian company, theItalian Petroleum Company of Albania (AIPA). This, and it must be emphasized, is the only oil field of Mussolini.

Di Mussolini - since from the 1939 Albania is an integral part of the domain of the Italian King-Emperor. For many hundreds of years theAlbania belonged to Turkey, but the 28 November 1912 its independence was proclaimed to Vlora.

For a few months, in the 1914 he had a ruler, the prince William of Wied , but at the outbreak of the Great War the prince returned to Germany and shortly afterwards most of Albania was invaded by the Austrians.

His independence was proclaimed again in the 1917 and in the 1920 it was recognized by the Great powers. In the 1925 a Republic was established with Ahmed Beg Zogu as president, a Muslim leader and hereditary of the Mati clan, and three years later the president was proclaimed King Zog.

Zog has made vigorous efforts but failed to modernize his country completely within a few years, but at least he maintained a certain level of public order and did much for curb the violence of the custom of revenge that had brought pain and misery to many.

He also introduced measures to implement the agrarian reform, aimed at improving the condition of the poor farmers and dividing the properties of the largest landowners. Something was also done about education and the Albanians, who had been banned by the Turks from using their own language, had the opportunity to go to Albanian schools, many of them for girls and for boys. High schools and technical schools were established in the main cities.

Then another factor that brought about progress was the establishment of a truly reliable force of gendarmes, with British officers under the command of General Percy .

But these steps along the road to progress have aroused much opposition among the most conservative elements of the country. There were several attempts at rebellion and murder, and plots and arrests were the order of the day.

Furthermore, the reforms cost money, and unfortunately the only country willing to lend to Albania in difficulty was Italy, so dangerously close. Mussolini he cast his eager eyes on the small country's mineral wealth, but was even more interested in its opportunities as a basis for its future military operations in the Balkans. Then Good Friday, from 1939, he sent his troops to Albania: Zog was removed with little difficulty, and the country was formally incorporated into the Italian Empire. 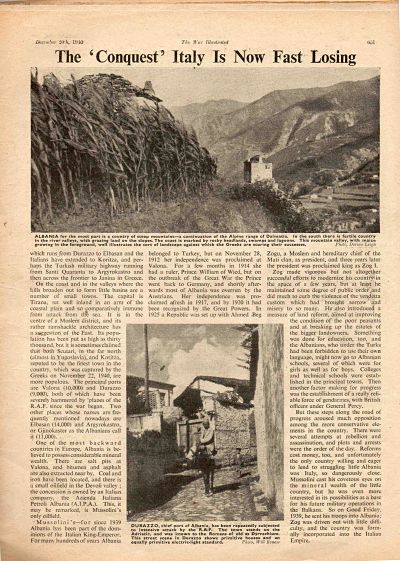