The portrait of Mustafa Kemal Atatürk made by Saimir Strati

Mosaic artist Saimir Strati won the record in the Book of Guinness Book of Records.

Fifteen square meters covered with 250.000 screws, of different colors and sizes, to define, in just 37 days, the portrait of Mustafa Kemal Atatürk, father of modern Turkey.

The portrait of Atatürk is found at the exhibition set up inside the historic Greek church of the Turkish city of Bor.

"The work can be considered visionary, because the material with which it is made is 'enlightened', as people believe it was Atatürk, father of modern Turkey. The screws are modern materials and the brilliance of the work adapts to the figure of the statesman "said Saimir Strati.

The work of the Albanian artist is considered by the Turks to be the best among those dedicated to Atatürk. For this reason, Saimir Strati is respected by an entire city.

"And in honor of this gigantic work that I did, as well as receiving the Guinness certification from London, they also gave me the Keys of Art of the city, really very exciting", has continued. Saimir Strati broke the record. This news no longer surprises us, as the artist is working to overcome another world record.

"Now I have requests from all sides, unlike the first times when no one believed in this artistic style. Where they will invite me, there I will choose the material, the size and the subject.

I have not received an invitation from Albania. I am an international artist and if the invitation comes from some other country I will go because I can beat another record. But I would have liked to be, why not, in Albania, also because my works have not been exhibited here " - declared Saimir Strati. 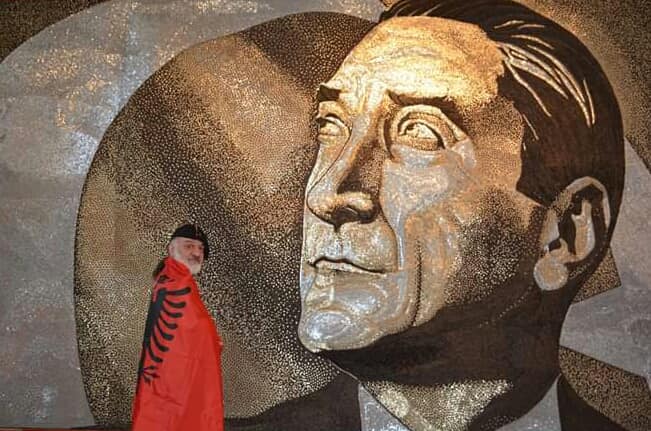 The Albanian from Guinness recorded the first record with a portrait of Leonardo da Vinci worked on nails. Of his 11 works that are part of the Book of Records, 7 are located in Albania.

There are no articles available