The volume "The Arbëreshe Woman Yesterday, Today, Tomorrow ... between the sacred and the profane" has just come out of the press

The volume "The Arbëreshe Woman Yesterday, Today, Tomorrow ... between the sacred and the profane" has just come out of the press

The volume "The Arbëreshe Woman Yesterday, Today, Tomorrow ... between the sacred and the profane" has just come out of the press. Its authors are Emilia Blaiotta, Lucia Martino, Flavia D'Agostino and Lucrezia Lindia.

Four arbëreshe women, with much love for the Arbëria, with professionalism and care, give life to a unique work of its kind, which tends to make the universe of the arbëreshe woman known to all interested parties. The world of arbëresh, between tradition, heritage and modernity, through the image of women, is presented in a complete and universal way.

Thanking the arbëreshe authors for the opportunity offered to me in being present among the pages of this book through the Preface and with the hope that the volume will become a source of rich information on the universe of the arbëreshe woman in Italy, Albania and for all interested anywhere in the world, I present the work, attaching the preface that I had the honor and great satisfaction of writing for this volume. 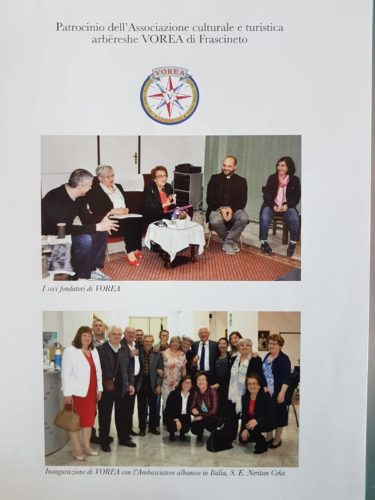 A set of descriptions, information and materials that promote linguistic diversity, recipes and flavors, images, traditions, religions, folklore, travel the pages of the book and are connected by a common bridge that starts from Albania since ancient times and is linked to Italy in a single identity, that of the Arbëreshë!

The Albania-Italy bond has always coexisted with me, indeed, I am really a creature of this bond and Italian-Albanian blood flows in my veins.

"How strange life is!" My paternal grandmother used to tell me when we lived in Albania.

"I am an Italian who left her homeland, Italy, out of love. In Italy I met an Albanian student who then became my husband and consequently your grandfather. Once I closed the Albanian borders because of the totalitarian regime, I could no longer set foot on the soil of my Italy.

But, on the other hand, do you know my nephew that in Italy there are instead many Albanians settled there centuries ago? They are called ARBËRESH! "

Since I was a child, I hadn't heard from anyone else in Tirana except from my grandmother, an Italian from Albania, from arbëresh.

My grandmother explained to me that not only had she married an Albanian who had completed her studies in Italy, but she was also well informed of the arbëresh that had resided since the Middle Ages in Italy.

The reason she talked about it with so much affection about them was another:

My grandfather had been during the first decade of the 1900, one of the Albanian students of the College of Sant'Adriano in San Demetrio Corone, a small village in Arbëresh. For this reason, his grandfather had many arbëresh friends, fellow students whom his grandmother had known when he was engaged, at a time when my grandfather resided in Italy.

And it is for this reason that the grandmother, from an early age, had known the fascinating Albanian world and in particular the arbëresh: the world of the Diaspora Arbëreshe established in Italy immediately after the 1468, the year of the disappearance of the Albanian national hero Giorgio Castriota Scanderbeg , also known as "the Athlete of Christ", for the legendary guide he had offered against the Ottoman advancement in Europe.

And considering that even the arbëreshs themselves during the dictatorship in Albania could not have such easy ties with the Terra Madre, Albania, I used to say to myself as a young man:

"Thank goodness that at least my grandmother met our brothers and a piece of Arbëria in Italy! Who knows how many beautiful stories of their traditions told them! ... "

It is a bit, also for this reason, that this book, although I am not myself native arbëreshe, when I read it, I immediately felt it as a part of me, bearing in mind also the fact that I have been following for a while with admiration and esteem the work of the Vorea Association of Frascineto and its contribution to the preservation of the arbëresh language, culture and traditions.

It is to be considered a real fortune that those who contributed to the creation of this volume are all arbëreshe women driven by love for their traditions and for all the cultural heritage inherited from their ancestors, with the intent to leave an imprint indelible also for future generations. In the pages of this book, through a collective effort, they have masterfully reported, each according to their knowledge and skills, as in a canvas embroidered with different colored threads, of different shades, a single motif: the traditional and authentic collage of their darling Arbëria!

It is a volume, the first and only one of its kind that collects as in a real encyclopedia, so many elements that cross the feminine universe arbëresh.
And being the woman, the genesis, the one who procreates and takes care of the children, of the entire focolare, a model figure and guide towards the study of an entire lifestyle, the collection in this volume could not exclude the position and the significant role of the arbëreshe woman.

So the arbëreshe woman's mission in real life, her importance in family and social life has been reported with so much affection and at the same time, with so much professionalism.

The book is a real laboratory created by arbëreshe women, who have combined their potential, their knowledge, their peculiarities - reserving, a special and constant place for the preservation of the arbëreshe language over the centuries, to religiousness and to religious rituals religious who fall in the respective seasons of the year - accompanied by songs, foods and party recipes, offering knowledge at 360 degrees about arbëreshe women's life sphere.

The book offers many useful ideas and information also for tourism in the area. The colors of the varieties of traditional costumes, the works all done strictly by hand, all this direct information, simple and original, mixing flavors, fragrances, cooking recipes serve and are of great help to the reader. The importance and variety of arbëresh food and culinary art in this book is the protagonist: "One cannot think well, love well, sleep well, if he has not eaten well" - Virginia Woolf.

With so many useful and interesting recipes included in it, you can create a separate recipe booklet fused into the volume with elegance.

The women authors and protagonists who sign this volume with their contributions, create the reader the feeling that when he holds this book in his hands, he will seem to be sitting at the door of an arbëreshe house, conversing with the gjitone çë dalen te praku derës (close sitting on the threshold of the door).

In this way, the doors of a typical arbëreshe house are thrown open to the reader and to the possible traveler, which at the same time serves as an invitation to visit the whole area made up of hospitable and beautiful arbëresh villages, which with pride and much love, in the long run more than five centuries have preserved their identity and dealt with the risk of being assimilated by the culture of the host country, with all the awareness of the partial inevitable influence that usually happens in these cases.

A set of pages that tends to align the arbëreshe living conditions seen from the linguistic, cultural, traditional and folkloristic aspect, an important ethnological imprint on arbëreshe life, represented by the majestic figure of the woman, as wife, mother, daughter, arbëreshe daughter-in-law .

I hope that this initiative will continue and grow more and more, giving us other books as really indispensable information tools. 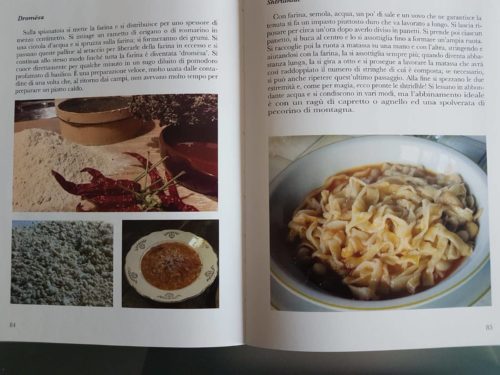 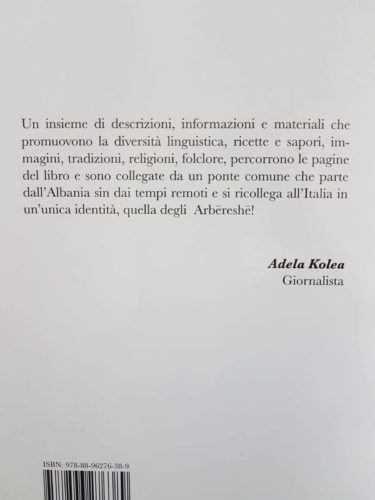 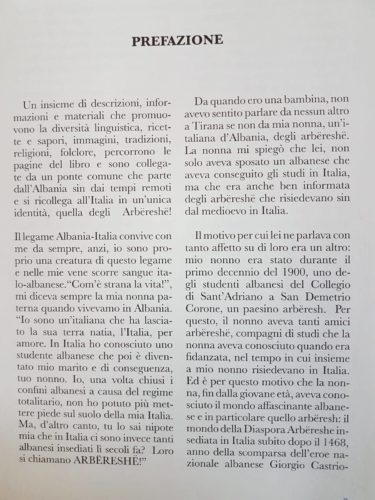 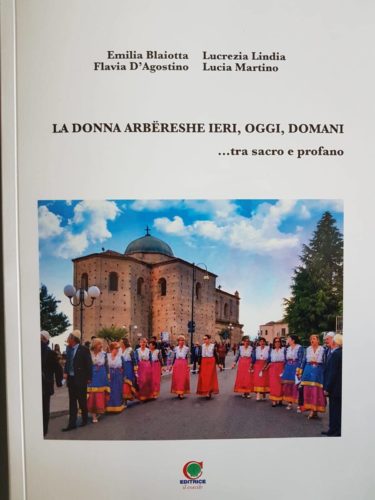 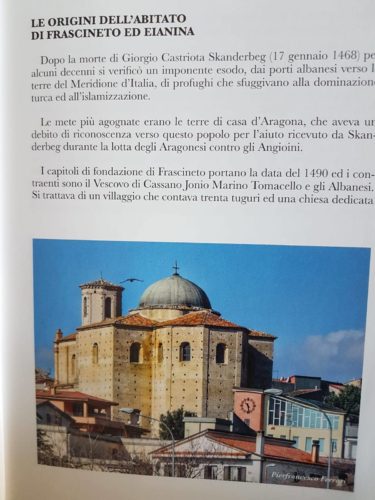