Connect Albania, an experience in Ireland to learn from the best

Connect Albania is an innovative way to create new jobs in Albania by exploiting the Albanian diaspora's investment potential in Albania.

The mechanism "Connect"Provides for a bonus for development agents (intermediaries) in the event that they have contributed to the opening of a successful company according to the criteria that are being selected, including that of creating jobs. Entrepreneurs who want to invest in Albania will benefit from a standard procedure developed through a program, which will allow them to follow all investment phases.

What is the presence of Martin Sheen in this video?

The answer is simple. Ireland is one of the best examples of countries that have used their diaspora as a real social and economic resource. The Irish diaspora spread all over the world, has always been historically very numerous and, precisely from this, the Irish state has had the inspiration to exploit this potential as a direct resource for the whole nation.

And from all this comes the idea of ​​'Connect Albania- as part of the program 'Involving the Albanian diaspora in the social and economic development of Albania' implemented by IOM (the International Organization for Migration - United Nations Migration Agency) in partnership with the Albanian government - which takes its cue from Connect Ireland , the Irish platform of the same name that has enjoyed great success with the Irish diaspora.

Also important was the role of the government, which not only supported the initiative through meetings, forums, etc., but also encouraged the 'connectors' or those who invested in Ireland from abroad: for every job created in the country, in fact, each 'connectors' has received a sum of 1500 € up to a maximum of 100 jobs.

The meeting in Ireland

IOM Albania has organized in the month of November 2018 an in-depth meeting for the main Albanian institutional partners involved in the program 'Involving the Albanian diaspora in the social and economic development of Albania'.

During the three-day visit, the Albanian delegation visited the corresponding Irish institutions and became familiar with the mechanisms and successes of Ireland in involving the diaspora. In particular with the meeting held between the Albanian Minister for the Diaspora, Pandeli Majko, and his Irish counterpart Ciarán Cannon.

Irish diaspora policy is based on five pillars: supporting, connecting, facilitating, recognizing and evolving. This policy was very successful in developing the country's economy thanks to the support of the government and different agencies, which allowed the Irish diaspora to develop a common sense of belonging to Ireland.

In this regard it is worth mentioning The Global Irish NetWork: a global network of Irish people spread across 40 countries around the world and making their valuable international experience in Ireland's economic development process available to their country.

The experience derived from this visit was considered of great interest by the Albanian delegation, which through the implementation of this program will strengthen its capacities to successfully carry out activities for and with the involvement of the diaspora and strengthen the role of the diaspora Albanian in the development of Albania.

Basically, the project consists of:

The road to follow was further delineated by one of the best known names of the Irish project on the involvement of the diaspora, Kingsley Aikins, in the meeting with the Albanian delegation. The speech by the Irish representative highlighted the incredible and very successful experience of Connect Ireland, focusing on the importance of the diaspora for countries such as Ireland and Albania and on the fundamental role of the government in involving the emigrants to invest in their country of origin.

The Irish platform was born after the economic collapse of the country in the 2008, with the aim both of helping the small and medium enterprises that were taking into consideration the international expansion, and of creating a database concerning the Irish diaspora in the world, in so as to be able to facilitate even those from abroad who wanted to invest in Ireland.

The initiative contributed positively to the economy of the country, thanks to a massive marketing campaign that saw Irish high-profile diaspora testimonials - such as successful actors and artists - who supported the initiative by publicizing the Ireland as a country to invest in.

Also important was the role of the government, which not only supported the initiative through meetings, events, forums, etc., but also encouraged the Irish 'connectors' or those who facilitated investment in Ireland from abroad: for every job created in the country, in fact, every 'connector' has received a sum of 1500 € up to a maximum of 100 jobs.

Tourism in this context

The tourism sector is certainly one of the areas that most attracts the diaspora. Not surprisingly, in Ireland, the National Authority for Tourism Development plays a key role in supporting Ireland as a quality tourist destination.

It is in close collaboration with other state agencies and representative bodies - at local and national level - and provides a range of practical business supports to help tourism businesses better market their products and services. Moreover, their site website contains very specific tourist information, with accommodation details and information on activities, attractions and events.

An example from which Albania should draw, sponsoring and promoting its wonderful tourist destinations, from North to South, which are not entirely known at European level. An example is the island of Saseno, a former naval base that for years remained far from tourist guides despite being an incredible pearl of nature.

Tourism, diaspora, investments, Albania: a strategy that could potentially be very productive at an economic and social level. Like the entire IOM Albania project.

But there is still so much to do, especially in terms of marketing: who or what will be the Albanian Martin Sheen who will contribute to the promotion of the project?

Involving The Albanian Diaspora: the Program 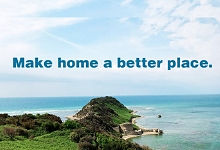 The program "Involving The Albanian Diaspora in the Social and Economic Development of Albania" is funded byItalian Agency for Cooperation and Development ( AICS ), and politically supported by Italian Ministry of Foreign Affairs and International Cooperation (MAECI)